The Next Big Thing From Uncle Sam…

The biggest catalyst today was the announcement that the government, along with the mortgage industry, will be helping those hurting. The idea is that the “troubled loans” that some homeowners got into can be renegotiated to better, more stable terms. It is hoped that the investors who were flipping homes are out of the market now and this plan will focus on the legitimate home owner. Let’s hope so because the steady decline of housing prices is due, in part, to people having to lower prices to get out of their homes and most were doing that while taking a huge loss.

There is also lots of other chatter out there about the automakers here in the US and whether or not the government should help. Politics is coming into play here as House Speaker Nancy Pelosi is calling for part of the $700 billion bailout measure recently passed to be used. There appears to be a sense of urgency as well as GM and Ford gave dismal earnings and forecasts last week. It would be hard thinking about a world without either of the big three.

Light, sweet crude for December delivery fell $3.08 to settle at $59.33 a barrel on the NYMEX, the lowest closing price since March 2007. Oil has seriously taken a nose dive and the payoff for us, the consumer, is lower gas prices. Imagine if gas were still $4 a gallon and how that extra cost would be paid for. In other words, where would the “personal cutback” come from? If you look at the chart of $USO below you can see a severe level of support. 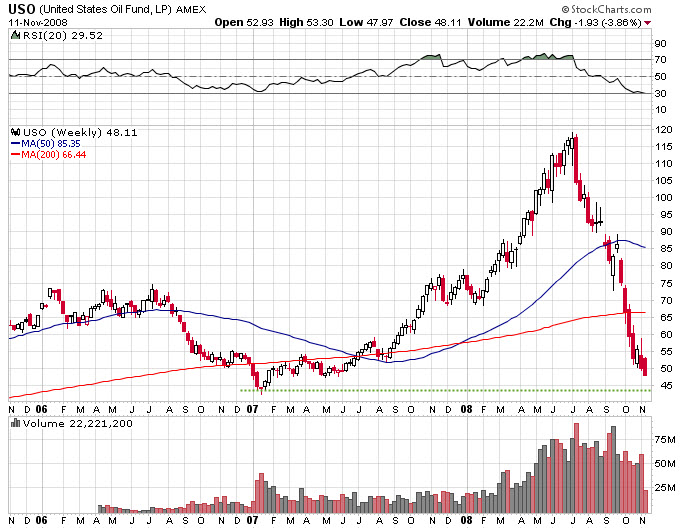