The 13 EMA on the broader index ($SPY) is still a road block for the bull’s journey higher. September 19 was the last time the SPYders were above the 13 EMA. The ETF was also trading at $124 a share compared to $96 a share today. Not knowing if there is a bottom in place yet, one thing that appears pretty certain is that a close above the 13 EMA would be huge for the bulls.

The Libor rate fell to 1.28% from 1.51% today and brought the key inter-bank lending rate below the Fed’s benchmark interest rate, which stands at 1.5%. Such price action suggests some stabilization in the credit markets. In the end, the credit markets need to ease in order for the equities markets to stabilize. Keep in mind that Libor was actually at 6.88% earlier this month so to be under 1.3% is a rather huge move lower.

Apple ($AAPL) missed on the sales number but the profits for Q4 were $.15 higher than the $1.11 expected by the street. However, the forecast for Q1 had both a lower profit and sales outlook. AAPL was down over 7% today, but is actually up in after-hours trading. Yahoo ($YHOO) also came out with earnings tonight and after being down over 6% during the day, it is trading up over 6% in after-hours trading. Pink slips are being handed out to 1,500 workers and the 2008 revenues were basically cut in half. 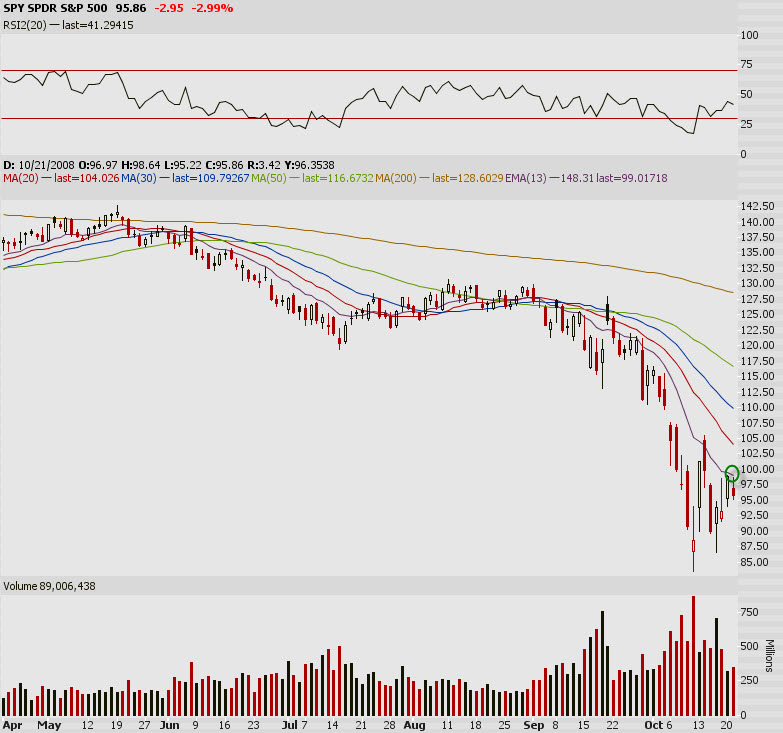