Warning: Trying to access array offset on value of type bool in /home/335080.cloudwaysapps.com/kjttymqdec/public_html/wp-content/themes/Centumr/inc/template-tags.php on line 1109
 March Madness In The Market – PsychTrader

March Madness In The Market

What’s that old saying? March in like a lion and out like a lamb? Well, doesn’t matter since I believe that saying referenced the weather. However, the markets sure did roar today as new lows were printed in every major index and 4% drops at that. March isn’t off to a good start for the bulls anyway (when was the last one?) The news of AIG’s bailout (again) and their record losing quarter didn’t give much hope for the markets today.

In looking at some of the option activity today I noticed a large amount of calls going out for $FRED. In fact, 6300 contracts (77 in open interest) at the May $15 strike went out today. I didn’t see anything in the news and their earnings aren’t until the 26th of March so it’s a bit baffling. Fred’s is a discount retailer so perhaps someone with a high risk tolerance bought those calls on the belief that in a few months the retailer’s numbers would put the stock well above $15 a share. 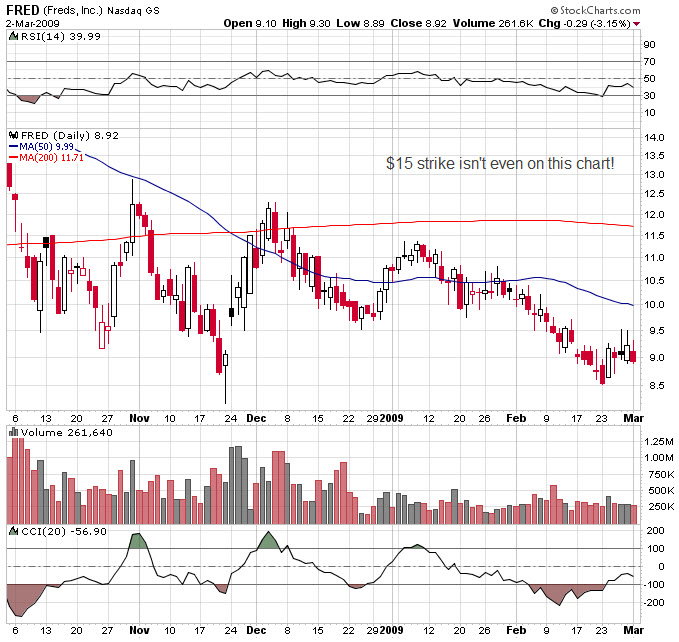 Those of you that got the weekly windup over the weekend saw that the S&P 500 had already given back all the post “dot bomb” gains from the past 5 years. What a story huh? We believe the markets can head lower from here but there’s also that part of the gut that says we could also get a bear rally at any moment. Yes, all the indicators are showing oversold and the talking heads are touting that fact, but you can’t ignore the fact that we still haven’t had a significant bull rally in this bear market. Surprising, since even in the pullback rallies of the tech bubble we had a few 10%-20% rallies; nothing doing in these times though.

Tomorrow we get pending home sales, total vehicle sales and plenty of Fed speak from Big Ben, Lockhart, and Tres. Sec. Geithner. On the earnings front, $MBI, $XLNX and $AZO are reporting tomorrow.