I use seasonality as a gauge to manage risk. If seasonal tendencies continue their course then the less likely technical levels are to be broken. When seasonal tendencies lose their way is when volatility increases and I step up my risk management as things are afoot. One of the most widely touted seasonal plays is the tendency of the first trading day of the month to be positive. Almost a layup, right? Not lately. 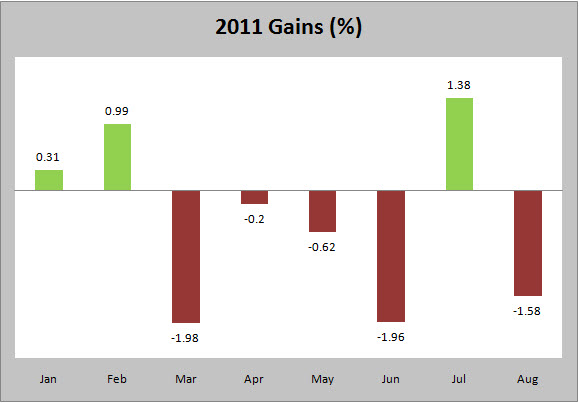 From the graph above you can see that so far in 2011 we’ve had 5 first days that were down for an average of -1.27% and 3 first days that were up for an average +.89%. It’s really anyone’s guess as to how the first day will trade as many are hip to the tendency and some even front-run it. I’ll be watching to see if it’s an up day as we’ve now had 4 higher closes in a row and a fifth would put us at +2 standard deviations (over the past year) going into non-farm payrolls as well as a three day weekend.