Let’s Get Ready To Rumble!

Two days into the new week and the bulls and bears have taken the gloves off. Monday saw the major indices print new multi-year lows on decent volume. The bears threw the first punch. It was countered today though with the bulls getting up off the canvas and breaking out to some intra-day highs just after lunch. Despite some late-day selling pressure, the bulls were able to hang in there and take the punches. In fact, nearly all of Monday’s losses were recouped today.

I watched the $VIX today to see how the fear was reacting to the bull’s attempt to buoy up the sell-off from Monday and I was surprised at what I saw. The $VIX took a pretty aggressive move lower today signaling that the move higher had some validity. The question that remains to be answered is whether or not it has any staying power. Obviously tomorrow will be a good chance to get that question answered.

We did have an inside day today (in the $SPY) where the price action remained inside Monday’s candle so watch for a break of either the high or the low from Monday. This is a Harami candle (can signal indecision) and if found near support after a prolonged downtrend, it can signal a bullish trend change. Obviously that’s a tall order in this market, but one to keep an eye on at the least. 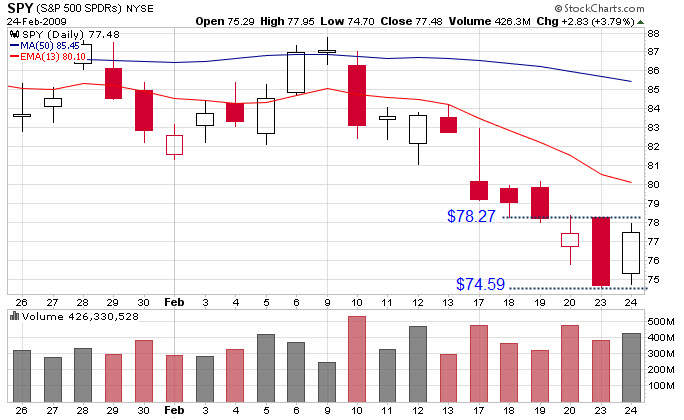