Today we saw the major indices trade in a narrow range up to the FOMC announcement. It was only in the last 30 minutes of trading that saw the selling kick in and bring the indices to their lows for the day. There was a hint of buying in the last 15 minutes which helped in forming the bottom shadow on the candles. In all, it was a pretty uneventful day when compared to the previous sessions; especially given the FOMC statement.

Let’s not forget that yesterday’s massive gain was mainly due to the belief that the Fed was going to cut. When the actual statement came out, the market just sat there for the most part. Kind of like New Year’s Eve 1999 (remember that Y2K crap?). I’ve always argued that there isn’t enough time from the FOMC announcement to the market close for any sense to be made of the statement. One key item from the whole rate cut was that the FOMC was unanimous in its decision to cut by 50 basis points.

A few key items from the statement were that “downside risks to growth remain” which suggests another cut in November. Another item was a statement geared towards the credit markets in which the Fed said “intensification of financial market turmoil is likely to exert additional restraint on spending, partly by further reducing the ability of households and business to obtain credit.” Not the best of scenarios for lower interest rates.

Take a look at the broader market (SPY) and that pesky 13 EMA! That thing will be the deciding factor for a short-term move higher. When (or maybe if) the daily candle closes above that we should see some sustained buying going on. Makes one wonder who is holding it down by selling into the close like we did today. 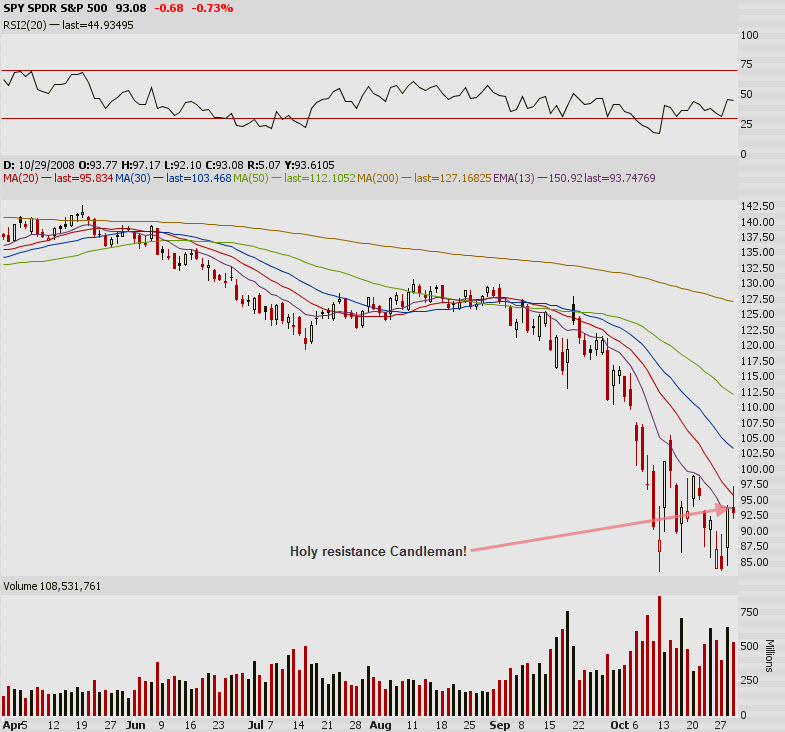