$ADS has over 33% of its float shares short and is approaching multiple areas of resistance as it climbs higher. The biggest level of resistance would be the downward trending 200 SMA which is currently at $44.65. The risk you run of shorting such a setup, either with stock or buying puts, is that the stock could climb higher and thus buying from both new longs and shorts buying back their short shares at a loss. This phenomenon is known as a short squeeze and there’s been a lot of that lately since the overall market bounced off the March lows. 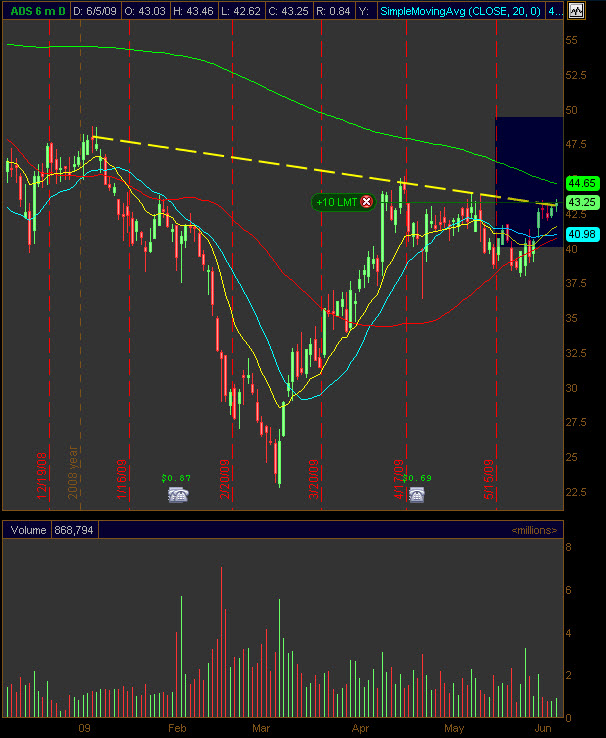 In addition to the technical levels that look to be resistance, take a look at the option chain for both June and July and you see a lopsided bearish tilt with plenty of open interest in the puts and not much action in the calls. There’s an obvious bias there so you could either look at constructing a straddle or strangle and see what happens, or, get adventurous and trade a backspread. The backspread works well if there’s a chance of a sudden and volatile move in either direction. This may sound a lot like the straddle or strangle, but with the backspread you can actually profit even if you are wrong in picking the stocks direction.

A short squeeze could provide enough juice to make a call backspread work, especially with one that has 33% of its float short. Think about the short sellers and where they would most likely have their stops and you begin to see the potential here. Here’s the idea that would allow the trade to have unlimited profit to the upside (since that’s the direction the stock would move in a short squeeze) and a small profit in the form of a credit for putting on the trade. With this backspread there’s about a 60/40 probability that the trade would be profitable.

In order for the trade to be profitable, the stock needs to get outside of the blue highlighted area indicated in the chart above. Obviously the greater reward is to the upside and thus the upper break even ($49.25) is further away from the current price of the stock. The lower break even ($40.75) is where the stock would need to be in order to keep the whole credit of $.75. Because the spread is a $5 spread you subtract the credit from the spread and you get your maximum risk of $4.25. That maximum risk would be realized if the stock closed at expiration near $49. 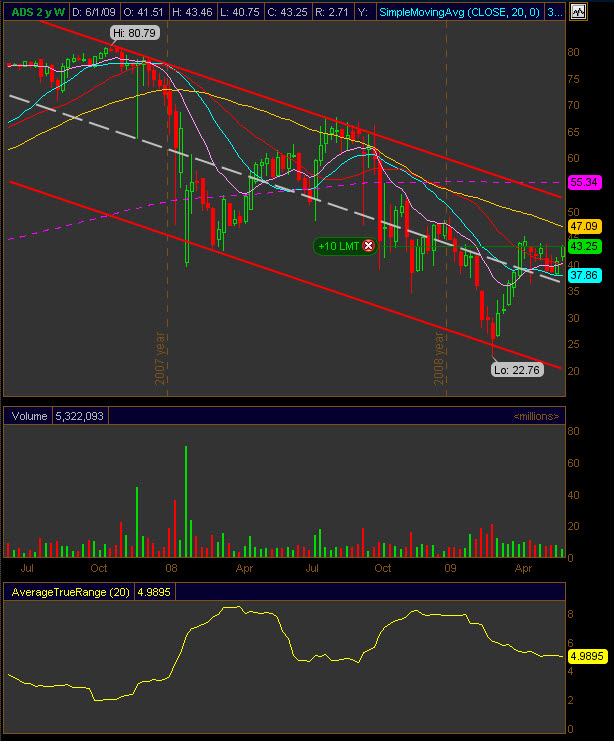 The chart above is of weekly candles and you can see the channel with the white dashed line as the midpoint of the channel. The stock has been using that midpoint as support and with a potential break to the upside the upper break even appears more likely. However, the nice thing is that if resistance does hold and the stock does move lower, the trade can still prove profitable.

This is in no way investment advice and I am not an investment advisor. I just wanted to share a scenario of a call backspread with a stock that could fit the profile of such a strategy. Options involve risk and you can lose all of your investment ($425/contract in this example) if you don’t know how to trade them. There are many variables associated with options such as Delta, Vega, Gamma and Theta and possibly Larry Kroger and Kent Dorfman  from the Delta Tau Chi House so be careful…