Trading in the “bigs”

I watched my beloved Rangers last night as they handed the A’s their hats out at the Ballpark in Arlington. The pitcher for the Rangers was Derek Holland, a 23-year-old lefty, who was just called up from triple A Oklahoma where his ERA this year was 0.93 in six starts. Holland’s season debut Wednesday couldn’t have gone any better as he shut the A’s out on five hits over six terrific innings. He walked one and struck out seven. 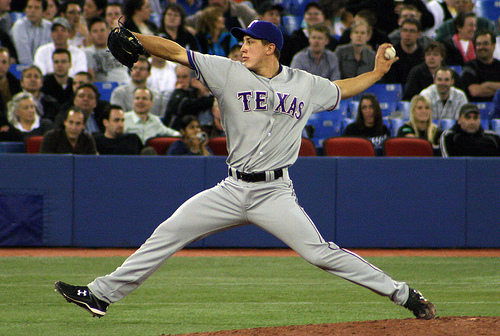 This wasn’t Derek’s first time on the mound for the Rangers. He pitched in 33 games in 2009 and ended the year with a .381 win percentage. Not the best year, but promising nonetheless. He is young, as pitchers go, and barring any severe injury I’d say he has the potential for a great long-term career. Derek recognized that if he were to pitch well in AAA ball that he’d be able to develop his pitching at a more appropriate level for his current skills. This would more than likely lead to another return to the mound in Arlington at a later date. He also recognizes that he may not stay with the Rangers for the rest of the year and is fine with that.

Derek also knows that if he were not ready to perform at the level required of him with the Rangers that it could damage any potential opportunities the future may hold. I’d credit this to him being level headed and proactive as a pitcher…seeing the bigger picture.  I’ve seen it time and time again when young passionate pitchers are expected to perform at levels they shouldn’t.  Their careers are short lived and they end up in the minor leagues for a few years being broke and then coach at a high school somewhere. I have nothing against high school coaches, but rather my beef is with the loss of the potential contender due to the lack of foresight. So what does this have to do with trading?

Trading is a performance “sport” if you will. Each day we participate in the markets we are measured based upon our performance. Some choose to look at profit/loss while others prefer win/loss ratios as feedback for their performance. Great traders, like great pitchers (really any pro athlete), are able to recognize when their game is off and make adjustments. Perhaps a move to AAA trading is needed whether it be stepping down significantly in size or passive participation. Once the edge is found, objectivity regained and skills honed, the mound can be taken again with success being a higher probability.

The “passionate” trader, on the other hand, will give it his all and over trade until his account is barren. It is only then that he realize some adjustments may be needed. Problem is there’s no working capital left and therefore he must move on with the odds being low of a return to the markets. Psychologically this is damaging to the ego and, more importantly, the loss of potential greatness which manifests itself as regret. Not being able to recognize failure while continuing to passionately trade could have been the one and only chance to truly perform at this level. It is now gone and that’s a lot to take in.

Bottom line is that it takes more than passion to be a major league pitcher or a great trader. It takes skills, among other things, to trade successfully. Skills can be learned as Richard Dennis and his “turtles” proved and as tee-ballers the world over have proven. Trading isn’t easy and great discipline is required as patience is exercised in developing the skills needed for success. If you find yourself passionately spinning your wheels in the markets it may be time to step off the mound.