My take on the crash of 2:45 this past Thursday is that it happened and I’m curious as to why it happened, but there is so much more to learn from it. I heard from clients that I haven’t worked with in years as they were calling or emailing to get my thoughts on what happened. I’ll tell you what I told them. It doesn’t matter why it happened or what exactly did happen. What I’m interested in is whether or not you were prepared (proactive) and traded accordingly or did you find yourself reacting to the situation?

I’m not suggesting here that what happened could have been conceived by any market participant. If they tell you that they were ready to pounce, they are more than likely full of themselves. I’ll admit, I was short a few contracts of the $ES_F and lucked out. I wouldn’t consider it skill or my uncanny ability to sniff out nefarious market quirks. No, it was plain luck of being on the right side. Profits were taken way too quick, but I can live with that and I’m thankful.

I first revealed the “secret sauce” a few weeks back and can’t believe the number of inquiries it has created. The updated chart is below and you can plainly see, as it should be no surprise, it took a dive. What I want to point out though is that several shots across the bow in the days leading up to the . There were several instances where the 20 EMA was broken and then subsequent lower highs made. The 50EMA was broken as well and both the 20 EMA and 50 EMA are rolling over. 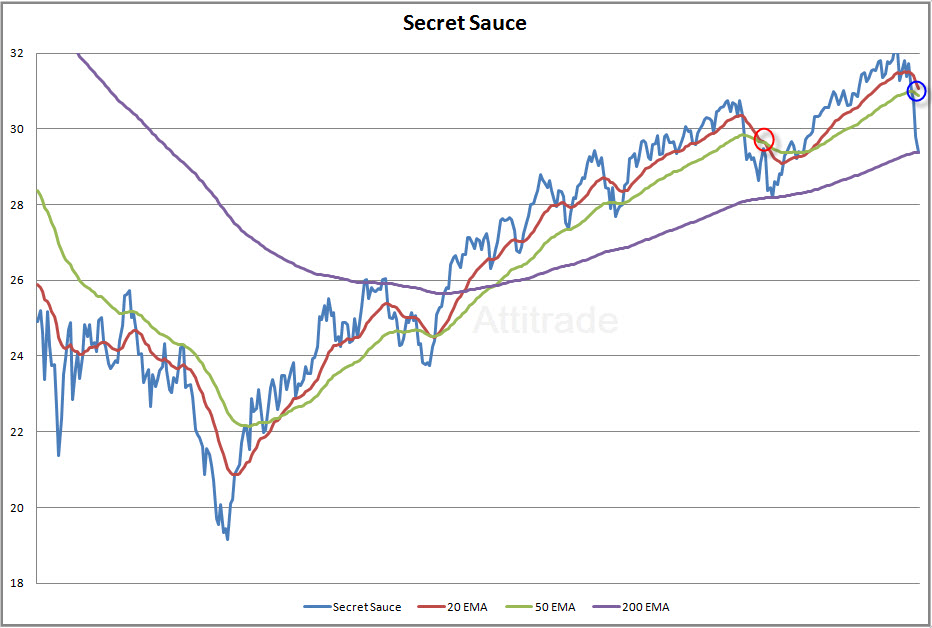 As it stands from the close Friday, the sauce is resting nicely on the 200 EMA, which provided support the last time it was touched from above. Whether or not we move lower from here is anybody’s guess, but if you look a the EMAs you’ll notice that they haven’t crossed yet and the last time the sauce was at the 200 EMA the shorter EMAs had crossed. In other words, what we have now isn’t what was last time.

Bottom line going into next week is that volatility is back in the market, fear and greed are ever present and we are but freckles on the arse of a gnat. If you are a position trader you might be best served with the protection that puts offer. If you swing trade I wish you the best as you have your work cut out for you. For those that are flat at the end of the day, rest well. No matter your market participation, odds are good that this past week brought out some great learning opportunities. I hope that you took the time to journal your trades, and more importantly, your emotions.

Manage risk and live to trade another day!