Down With The Economy!

The party is over for McCain and the bulls as Obama won and the markets sold off today. As mentioned in last night’s newsletter, it isn’t too surprising to see the sell-off today after a nice six day climb higher. Some may argue the relief of knowing who the next president is going to be caused today’s sell-off. Others argue that hedge fund redemptions, which end on the 15th of the month, were to blame. Bottom line is, the major indices gave back quite a bit today albeit on light volume. 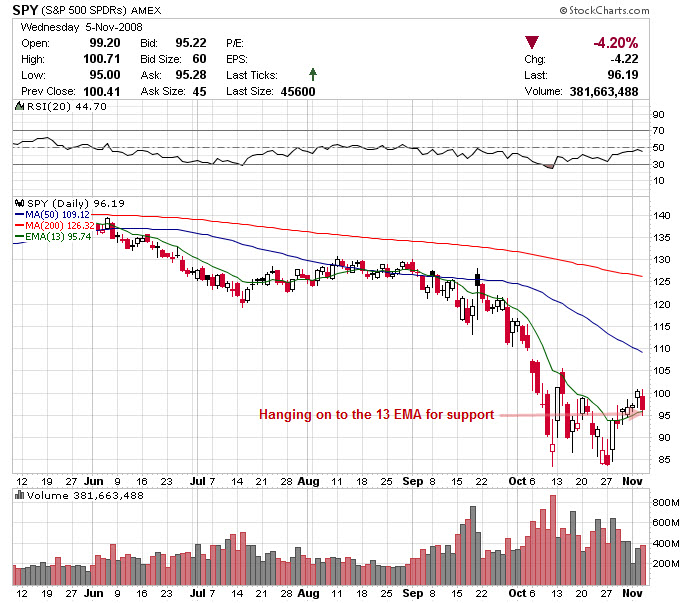 The data that came out today from the ISM showed a worsening services sector by reporting a 44.4 reading. Anything under 50 on this index suggests contraction and economists were actually looking for 47.5. As a result, we continue to get less than favorable data for the current economy and we still need to question how much is priced into the market already. One item to watch overnight is the BOE potential rate cut of 50 basis points. If that doesn’t happen, it could get ugly (supposed to come out around 7 am ET).

The ADP jobs number came out hotter than expected by a whopping 57K as the street was looking for a loss of 100K. Not only did this month’ data show a loss of 175K, but last month’s number was revised down to 26K (it was at 8K)! The jobs data on Friday could have a large impact on the market whether it is better than or worse than expected.