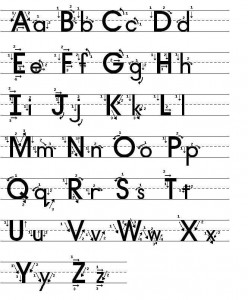 The image to the left should be recognizable by most of us as the American alphabet. It is from these 26 letters that billions of people are able to communicate on a daily basis. We learn the alphabet early on with rhymes and rote memorization so that we may contribute to society through our interactions. We all progress at different speeds, but eventually we all get to the point where we can recognize all the letters in the alphabet. It is at that point that we build upon that foundation and begin to spell words like C-A-T and T-R-E-E. These words are then combined to form sentences which consist of several words. From those sentences we form paragraphs and so on until we are able to write and communicate with others through pattern recognition.

This ability of pattern recognition isn’t anything new or even earth shattering–it’s common sense. Just like the alphabet, which is in a pattern, we can discern the different patterns in lots of things. Take a look at the image below and you can recognize a pattern as well where there are higher highs and higher lows. Unlike the alphabet and some other patterns that have a beginning and an end, some patterns are continuous. Such would be the case for a chart that shows price action in a publicly traded company. 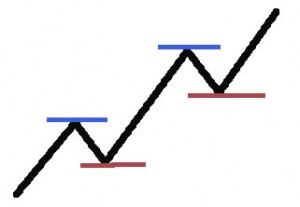 We could begin to see patterns in the line above and learn to predict or assume what has the higher probability of occurring next. As an example, looking at this pattern above we might safely assume that the odds are greater that the line will move lower from here as it has in the past. This does not necessarily mean that it will, but the odds are in the favor of such a move. It is this assumptive process that will serve not as an ends, but more of a means to and end. This pattern recognition assumes that the next move would be lower and thus helps us to proceed further. Information that we’ve gathered from the past can help us predict what the future may hold and this is the basic tenet of technical analysis.

Below is a list of what I’d recommend to have in a trading journal and, as with anything in life, you’ll get out of the journal what you put into it.

If you are able, ATTACH CHARTS TO ALL ENTRIES! Remember the pattern recognition? Something may not have stood out in the heat of the moment, but several weeks later you may see similar chart patterns to this one. It is at that time that you begin to find common threads and themes of your trading which will allow you to exploit those things you do well and avoid those things you do poorly.

The above should be easily done and would suffice for the most part. However, if you really want to excel at this then a comment section is where the real clarity comes from as you listen to yourself. Take a moment and run through questions like this to get a better understanding of what’s going of for you at that moment and document it. Here’s some examples of what you could ask yourself:

The last suggestion I would have is that you simply open up a blog and use that as your trading journal. There are several free services out there that allow you to create a blog and upload images, etc. The neatest thing about using a blog for your trading journal is the search function as each post or entry you make allows the use of tags or keywords. As an example, for every trade you make that is bullish, put the keyword bullish as a tag and later you’ll be able to search for that keyword. With a few clicks of the mouse you can see every entry that you ever made in your trading journal that has the tag bullish in it. Take a few moments and read through them and start recognizing patterns.

Here’s a few suggestions for resources that provide free blogs (in no particular order): [list type=square_list]

Write as often as you can in your trading journal and get into the habit of writing in it on a daily basis. When you close a trade, income or expense, take the time to capture your emotions at that point. A good idea is to come back and revisit your journal entries on a quarterly basis and add to them as you are now emotionally removed from them. You might even begin to sense a change in emotion as you read your prior entries…run with that and profit from recognizing your patterns.