While pursuing my doctorate in ’99 I had the opportunity to see Dr. Albert Ellis give a lecture in Pittsburgh and will always be grateful for that. He was the old curmudgeon and everything that I expected. For those that don’t know, he created rational emotive behavior therapy (REBT) and I used it with several of my clients over the years.

REBT is a cognitive therapy and thus focuses mainly on thought processes and works from the assumption that, for the most part, we as humans are our own worst enemies. I for one can attest to this notion as I’ve seen it play out in my own life on several occasions.

One of the key pitfalls that we tend to fall into is what Ellis called “musterbation.” When you hear yourself saying things like “I must get into shape” or “I must make $ 1000 a day trading” you are musterbating.You can substitute “should” “need” and other similar words and get the same result.

The cliff notes version of REBT can best be summed up in the image below. The belief (B) that we have about the musterbation statement (A) leads to an emotional consequence (C). It’s the irrational belief (B) that is screwing you up and that’s where the work needs to begin (starging with D). 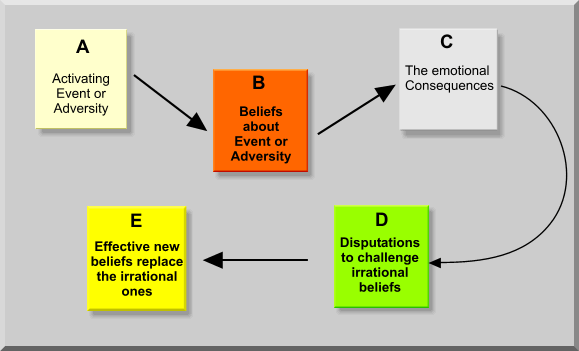 At times, the beliefs become debilitating in that confidence suffers and focus becomes less objective in favor of the irrational beliefs. As I mentioned earlier, a belief that I’ve heard numerous times as a mentor was something like “I need to make $ X a day.” It’s good to have goals, but it’s what happens if those goals aren’t met that causes issues. If I don’t make $ X then I’m not a good trader and I’ll have to move to the next strategy/market to become a better trader. If I don’t make $ X today then I’ll have to assume more risk tomorrow and make $ 2X . Before long, that $ X per day becomes your worst enemy as it saps your mental energy.

This is just one example of musterbation and I’m sure you’ve thought of a few while reading this post. The worksheet above was created by other cognitive behaviorist to help their clients overcome the irrational beliefs. I used something similar with my clients back in the day and thought you might find it useful.

Bottom line is that with the New Year upon us I know many people like to create goals and tend to set the bar a bit too high at times. One suggestion I’d have for those that focus on making $ x/day is to rather focus on stopping trading if $ x is lost/day. Think about that one for a minute. How about a goal of becoming a better trader by doing X,Y,Z? It could be managing risk better, practicing a strict stop strategy, keeping a trading journal, whatever. The point is that if you become a better trader then the $ X/day takes care of itself and you avoid putting undue pressure on yourself.

I’d love to get your thoughts/feedback on this. Perhaps you have something that works for you, let me know what it is.  Whatever goals/aspirations you have for 2010 I hope that they contributes to a better quality of life for you. Let’s roll!