May has been one of the lightest cycles for me in many months with regards to my discretionary account. In fact, I’ve only put on two trades for the entire month (other than the occasional futures day trade). The first trade I put on was selling the 150/155 call spread in $CMG when the stock broke back down through the 5 DMA (blue line) post eps.  I sold one lot at 1.10 and then a few days later sold another lot at 1.35 for a net credit of 122.50. Since it’s a $ 5 spread and I took in $ 1.22 my risk is $ 3.78. The idea being that CMG would finish option expiry under the 150 strike (dark shaded area on chart) and I keep the 1.22 credit.

The other trade I entered was one in which I legged into an iron condor in $AAPL. On the 7th of May (day after the flash crash) I sold one lot of the 220/190 put spread for 3.25. This was a larger risk/reward since the spread is $ 30 and I was prepared to close the trade out quickly if AAPL closed under S1 of the opex pivot (227.99). When AAPL bounced nicely the next week I decided to reduce the risk in the trade by taking in more premium through selling a call vertical. I sold one lot of the 270/290 call spread and took in $ 1.05 for doing so which increased the credit to $ 4.30 (as long as AAPL stays within the dark shaded area the options expire worthless).

Both trades look highly likely to expire worthless with only three days left in the cycle. That does not mean that I don’t monitor them daily. In fact, when CMG broke the downtrend last week I considered taking the trade off. Why didn’t I? Two reasons. This is my discretionary account so my belief was that even though a resistance level was broken, I still had $ 15 of “play” while the Theta was eroding the value of the options and I liked that. The other reason was that volume post eps was drying up and odds were good that the moving averages were going to use time to correct. Both of these observations made sense to me yet I still put a stop in to buy back the spread for a small profit just in case CMG decided to run.

Not sure what, if anything, I’ll do in June, but it looks like I may be taking it easy over the Summer as this cycle was rather enjoyable with so few positions. I have lots of exciting (at least too me) research that I’m working on as well as four kids that will be out of school in less than three weeks. I will, however, continue to sell premium on the $SPX as that isn’t part of my discretionary account. 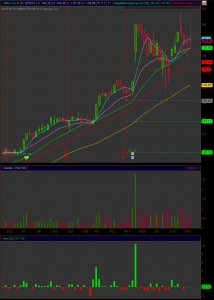