One of the five factors the Market Awareness Profile (MAP) measures is conscientiousness– the way in which we control, regulate, and direct our impulses. Impulses are not inherently bad; occasionally time constraints require a snap decision, and acting on an initial impulse can be an effective response. Nonetheless, acting on impulse can lead to trouble in a number of ways. Acting impulsively disallows contemplating alternative courses of action, some of which would have been wiser than the impulsive choice. This can be especially true when referring to trades taken (or not taken) which can lead to regret.

High scorers tend to be more organized and less cluttered in their trading space. They tend to avoid trouble and achieve high levels of success in the markets through purposeful planning and persistence (discipline). On the other hand, they can be compulsive perfectionists and miss some opportunities. In doing so, counterfactual thinking can consume the thought process and lead to a false sense of self-efficacy.

Low scorers may be considered unreliable, lack ambition, are easily distracted, and less likely to adhere to trading rules. Trading plans may be thrown aside for gut feelings and, at times, this may be beneficial as the ability to recognize trouble early could minimize losses. However, trading plans work and work best when strictly adhered to which would suggest low conscientiousness traders tend to favor a discretionary trading style. Unfortunately, a majority of discretionary traders fail to become a market master simply because of the lower odds of success, especially when compared to a more mechanical system.

High scores on conscientiousness are desirable and work well for mechanical systems and a hybrid system with both mechanical and discretionary aspects. A low score on conscientiousness does not mean you will be a failure at trading, but your equity curve may not be enough to sustain a period of consistent profitability. This is mainly due to the inability to remain focused and control impulses which hinder success as time is spent focusing on the self (what you think should happen) and not the markets (actual price action). 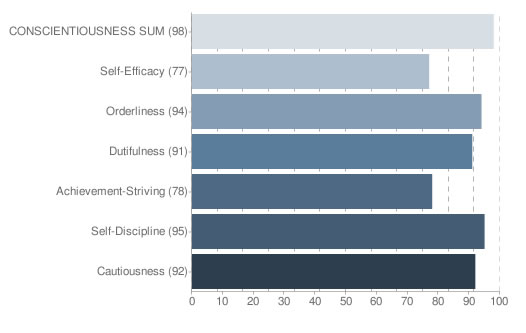 To better understand conscientiousness, let’s take a look at the six facets that make it up:

Personality traits describe, relative to other people, the frequency or intensity of a person’s feelings, thoughts, or behaviors. Possession of a trait is therefore a matter of degree. Please keep in mind that “low,” “average,” and “high” scores on a personality test are neither absolutely good nor bad. As with any personality inventory, scores and descriptions can only approximate an individual’s actual personality. However, the real value of the results can be seen as you focus on areas of improvement when processing closed trades. In addition, how you present yourself outside of trading (I’d include how you see yourself) can be vastly different once money is involved.