It seems so easy to focus on the things we do wrong. I can name hundreds of mistakes I’ve made in my life. I choose not to focus on what went wrong, but rather on how I can improve my standing and learn from my mistakes. I found one of the most frustrating aspects of being a therapist was the client who came in for a session and wanted to focus on the negative aspects of their life. The goal was usually to try and find fault or pass blame to someone or something. 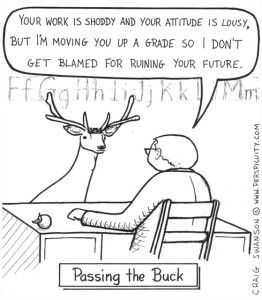 I got to the point as a therapist when a client would start the blame game I’d cut them off. I’d hand them a notepad and pen and ask them to write down five things that have gone reasonably well for them lately. Depending upon the speed at which the client could create the list gave me an idea of how difficult it would be to work with them. Those that were quick to create the list were also those that took back control of their emotions and life with greater ease.

Can the same can be said of trading? How many poorly taken trades can you recall from your history? Thumb through your trading journal and see what stands out. How many negative references are in there? How many positive references? If there are more negative than positive entries I’d suggest that you focus more on the latter.

We all know that very few who embark on a career as a trader make it. We also know that damn near everyone we talk to is a profitable trader, right? How can that be? WHO CARES!?! Be honest with yourself and learn from your mistakes. Exploit the things you do correctly in the market and turn a profit. At the end of the day it’s just you and your equity curve. You can choose to bullshit your buddies and tell them what a great trader you are (knowing that you’re more than likely break-even or negative) or strive to become a profitable trader and grow.

Trading is a business, not some fantasy league or hobby that we throw money at purely for entertainment. Treat it as such and keep the expenses low while looking for ways to increase revenue. To focus on losing trades while attempting to pass blame is pointless and the easy way out. There’s a reason the trade went against you, find out why. Understand that trades can and do go against you so manage risk before the trade is entered to minimize the loss, both financially and psychologically.

When you blame others, you give up your power to change.
-Dr. Robert Anthony