Yes Virginia, There Is A Recession!

As if we didn’t already know such, the current recession was made official today. The official start of the recession was December of 07 so we’ve been in it for a year now. Many economists believe the current recession will be the most severe since the 81-82 recession. It’s no wonder with the most severe financial crisis since the 1930s on our hands and record breaking unemployment rates. Now that everyone is on the same page it will be interesting to see the prognosis for when we get out of the recession. Most are saying that it will be well into next year so pack a lunch.

The Fed meets on the 15th and 16th of this month and will more than likely cut rates again but they don’t have much to cut. The key interest rate now stands at 1 %, a level seen only once before in the last 50 years and I doubt they’ll take it down to 0. While Dr. Bernanke said that further cuts are feasible, there are other ways to help. Whether it’s buying Treasury notes and bonds or taking the rate to 0, the end result will be to stave of deflation and a prolonged recession.

A key to helping get out of the recession will be earnings but those aren’t due to start until the 8th of January when Alcoa ($AA) “officially” kicks off earnings season. Until then we will be at the mercy of economic reports and any corporate activities like mergers and acquisitions or bankruptcies. We do get some heavy duty numbers on Friday with the non-farm payrolls and unemployment rate which will be the first real test of the markets since the official recession. 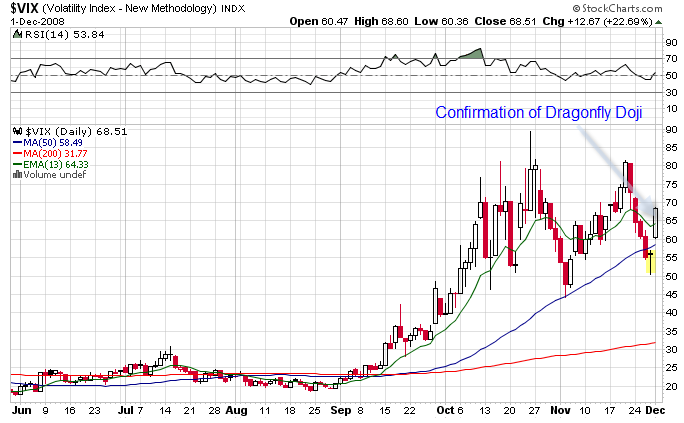 Tomorrow we get total vehicle sales and Sec. Paulson and FOMC member Plosser speaking. On the earnings front we have SPLS and SHLD reporting.