Yes, today’s price action in the Dow and the S&P was the third straight day of gains, but we formed a black candle in the broader market. The black candle occurs when you close lower than the open, but you also close above the prior day’s close. Basically, it’s seen as a bearish candle as the bulls weren’t able to keep the gap up sustained. However, the fact that the major indices didn’t sell off today is a good sign that perhaps a bit of stability is returning to the markets.

The futures got a significant bounce this morning from the Government’s plan to inject $800 billion into to help curb consumer debt and make mortgages more affordable. This pre-market news caused the gap higher, but we also got some good news in the preliminary GDP as it came in as expected; a -0.5% loss. In addition, consumer confidence actually increased which typically leads to consumer spending. The street was looking for 38 and the reading came in at 44.9. October’s number was actually revised higher as well, albeit only 0.8.

Volume was light again today as the holiday’s are upon us and this will become more the norm. Expect more of the same as tomorrow’s volume is typically extremely light as most traders take either the whole day off or put in a half-day. Be cautious of any technical breaks as they could be false so verify with volume. 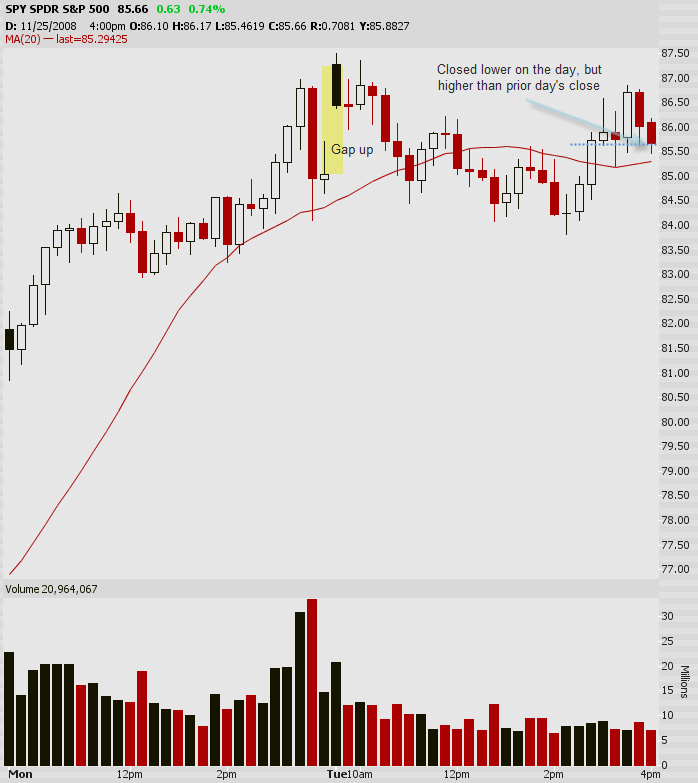