The need to be right vs being profitable

One of the hardest lessons I had to learn was that every trade didn’t have to be a winner. In fact, it was OK if I took a loss on a trade as long as it was within my risk parameters  and my winners were allowed to reach their potential. I know that over time I will be profitable if I have a plan of action before the trade is entered. This is not an easy lesson to learn.

On Monday I sold some weekly put spreads on the $SPX fully expecting a gap higher come Tuesday. My thinking was partly due to the short-term indicators suggesting a bounce or sideways action at best, both of which work for selling premium. And partly due to the fact that I’ve become accustomed to selling premium each week in the $SPX. So much so that one might consider my actions with weekly options addictive.

Part of my mantra and trading style has always been to look for a target before I pull the trigger. Selling premium is no different so when we got the bounce I was expecting I was using a target of the daily woodies pivot. I use woodies because they take into account gaps and use the days’ open in their calculation. We gapped right into that pivot (129.66) Tuesday and didn’t really see any increased buying or short covering at that level so I decided the night before that I’d play the gap if I didn’t see significant price action at the open. I bought back my short strike and was ready to trade the gap with my long put but was stopped for a scratch when the pivot was taken out. 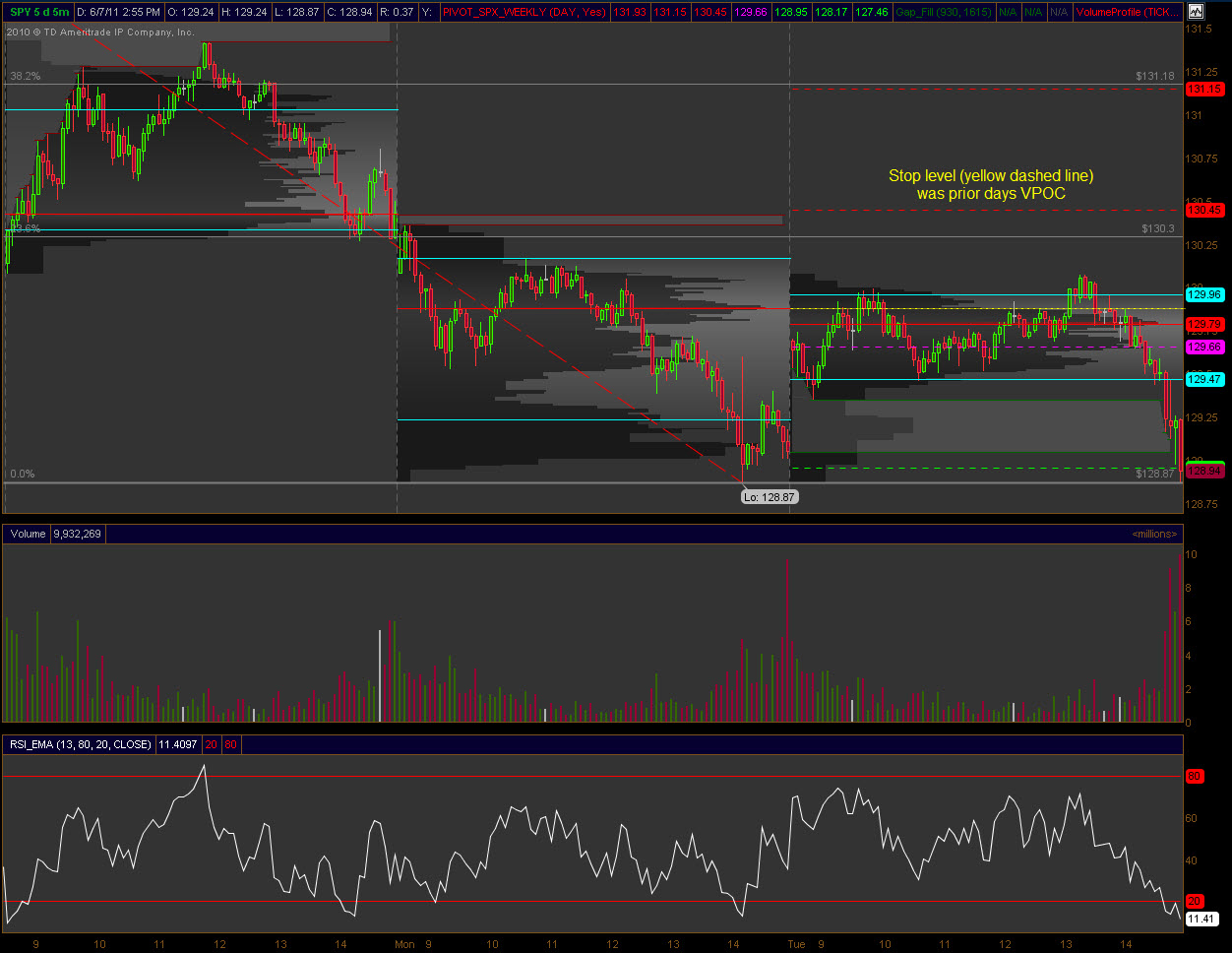 I could be mad or upset and continue to push my thesis on an unwilling market, but that’s a sucker’s game. What really sucks about the price action Tuesday is that my thesis was indeed correct but my timing was off. That’s OK and I can live with that, but that wasn’t always the case. Where faulty thinking can occur (and damage to an equity curve) is when the mindset of “I’m right and next time I’ll stick with my guns” becomes concrete. If you look at the price action after I closed my trade the market made some good progress above the prior day’s VPOC (yellow dashed line) and into the upper end of the prior day’s value range. That would have been a larger loss than I was willing to accept, before I placed the trade, and met that I let my objectivity cloud my judgement.

Yes, the gap did fill (I was at the pool with my kids when it did and was alerted via email) and yes, if I had stuck with my instinct I would have been profitable, but that’s not always the case. Adding insult to injury is that it’s looking like a nice sized gap lower to open today. At one time this scenario would have been damaging to my confidence going forward, but not in the way most would think. The damage occurs because the next time a similar situation is presented I’d be tempted to stay the course rather than trade my plan. That, my friends, is where small losses and scratch trades turn into big losers. You can’t make it in this game with that type of mindset. Be proactive, not reactive!