Over a series of posts this week I’m going to share some of the process I go through each option cycle to discover where I should be selling $SPX premium. The chart below is where I begin. Each candle represents a complete option cycle and thus I have a range. I start by looking at the last 6 option cycles and the range that they produced.

This simple exercise allows me to know the range the market has experienced most recently. If I take a simple average of the ranges I come up with 96.94. This average takes into account an earnings season and several instances of economic reports like Non-farm payrolls, Consumer Price Index, numerous housing related numbers, etc. I then attempt to recollect any unexpected events that may have occurred. April had a large range and I’d like to know why so this would be “homework” that I’d want to accomplish before moving any further. 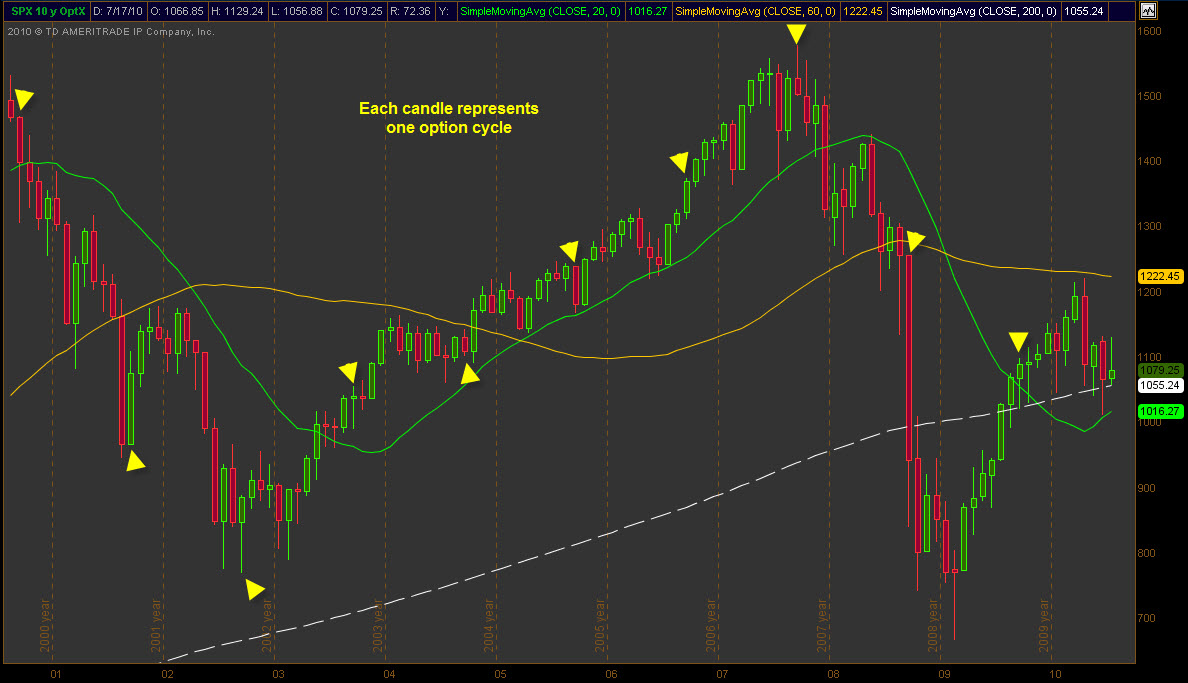 In the chart above, the yellow triangles represent prior September option cycles and the range for that period. Starting with the most recent cycle they are:

Obviously the 415 range sticks out and that was the financial crash which involved unprecedented events. Events such as the financial crash can’t be accounted for before I sell premium but I’ll discuss in a future post how to hedge/adjust a position for such events. Other than that one instance, September appears to be a rather “mild” cycle over the last decade. I do notice that the further back in time the larger the ranges were and that’s worth noting. In looking at the chart I can see that the overall market was in a downtrend. That little piece of information can sway my analysis so more on it in a later post.

Next I’ll take the average of the range for this period (10 years) and I get a 122.52. If I take out September 2008 (415 range) I’d get an average of 89.95 and a pretty good idea of an expected range for the September 2010 cycle. I’ll use this information as I move to assessing technical levels in the price action which I’ll cover in the next post.