A good scan that I like to run when markets pull back is one that looks for stocks that have touched their 50DMA from above and are still above their 200DMA. The reason I like them is that they are still showing strength for the most part and if the pullback is just that, a pullback, these may be a great trade. If the pullback turns into a trend reversal then these stocks will be the stronger ones and last to fall so they could be my bird dogs. Here’s what came up on the scan from Friday’s close:

$KCI has a put/call ratio of 50.43 and looks like it’s ready to make a move higher. EPS was on 1/26 and it looks as though the market was ok with the numbers. Looks like those March 40 puts were bought back for $2 on Friday but there’s still a large open interest at the March 35 strike. The Beta for KCI is rather small (.23) but the average true range is picking up quite nicely here as the potential for a breakout stays in play. The short interest has stayed above 6,000 for some time now and would currently take about 7-8 days of normal average volume to cover. 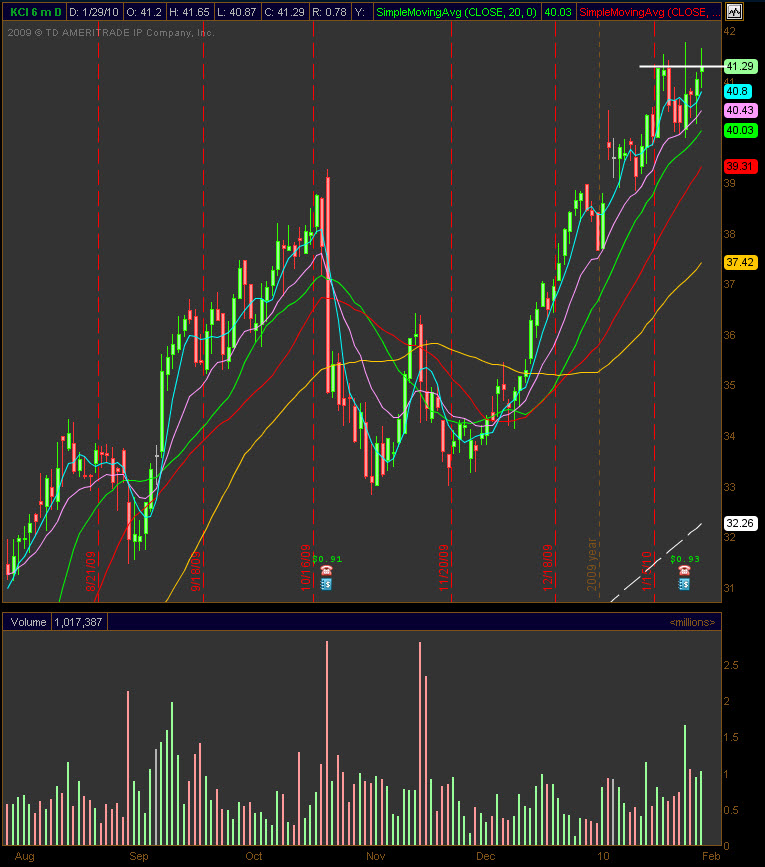 $SII has been in a channel for a couple of weeks on the daily chart, but the weekly chart is where the potential can be found. There’s a nice ascending triangle here and we are talking post EPS as well so that catalyst is out of the way. Obviously the stock is tied to a commodity and that always takes precedence over technicals. The options have $ 1 strikes and that makes it nice for calendar spreads where you could buy an in-the-money (ITM) call by several strikes several months out and then write (sell) the front month calls that are slightly out-of-the-money (OTM). 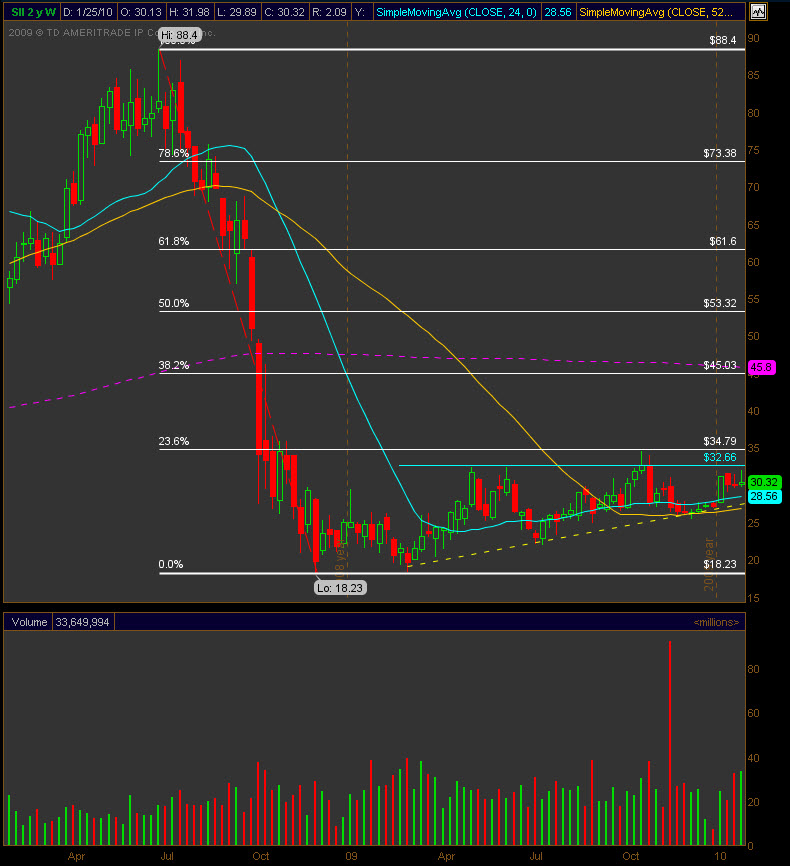 $CNQ has been in a tail spin since making a lower high back near the first of the year. The stock is currently at support and has a few nice targets waiting below in the 200DMA and a gap fill from 9/4. Earnings are on 2/18 so there’s some risk there and the put/call ratio is at 1.8 which suggest a somewhat more bearish stance. Odds are good that implied volatility (IV) will increase as EPS approaches so perhaps a simple put buy could work. The Feb options expire on the 19th so they could work for this but you’ll also be battling Theta. Looks like most are using he 65 and 75 puts as that’s where a bulk of the open interest is. 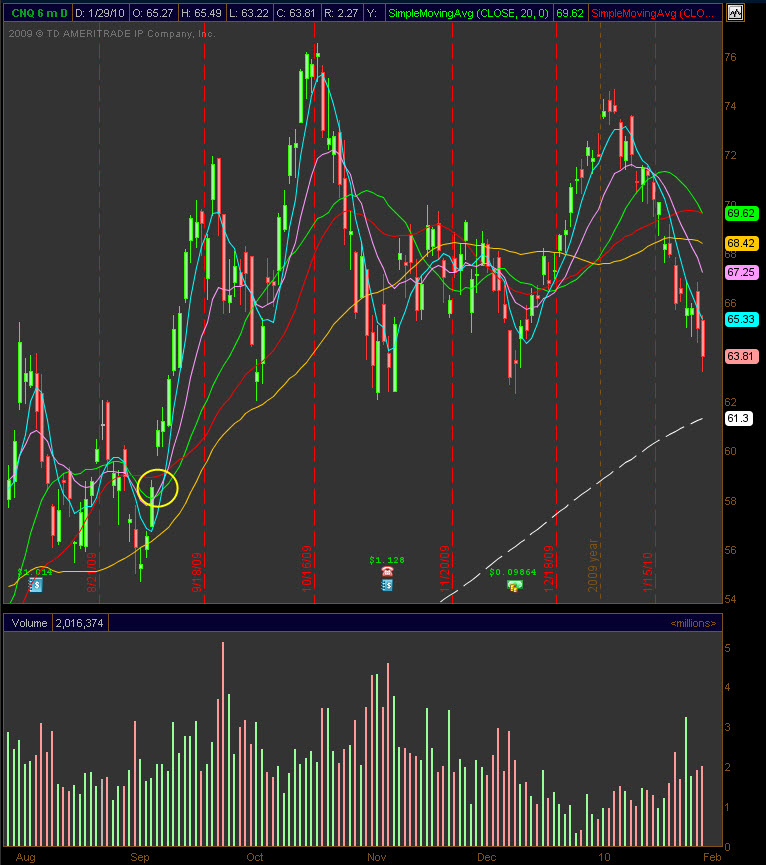 $RRC recently broke through the 200DMA and has a decent target of a gap fill from 12/11. Looks like it could fill pretty quickly as the ATR is on the rise and approaching $ 2. Earnings are on the 23rd of February so there’s plenty of time for this gap to fill without the earnings catalyst. March options would be in play for EPS and there is a large open interest I the March 30s of nearly 1,800 contracts. Short interest has come in quite a bit since October, but would still take about 4 days to cover at the current average daily volume.  On gap fills like this I like to use a high Delta option and prefer not to control more than 10% of the open interest. I don’t like battling Theta either and the Feb 50s give a .83 Delta for less than 1/10th the stock price. To me, that’s much better than trying to short the stock and run the risk of a squeeze. 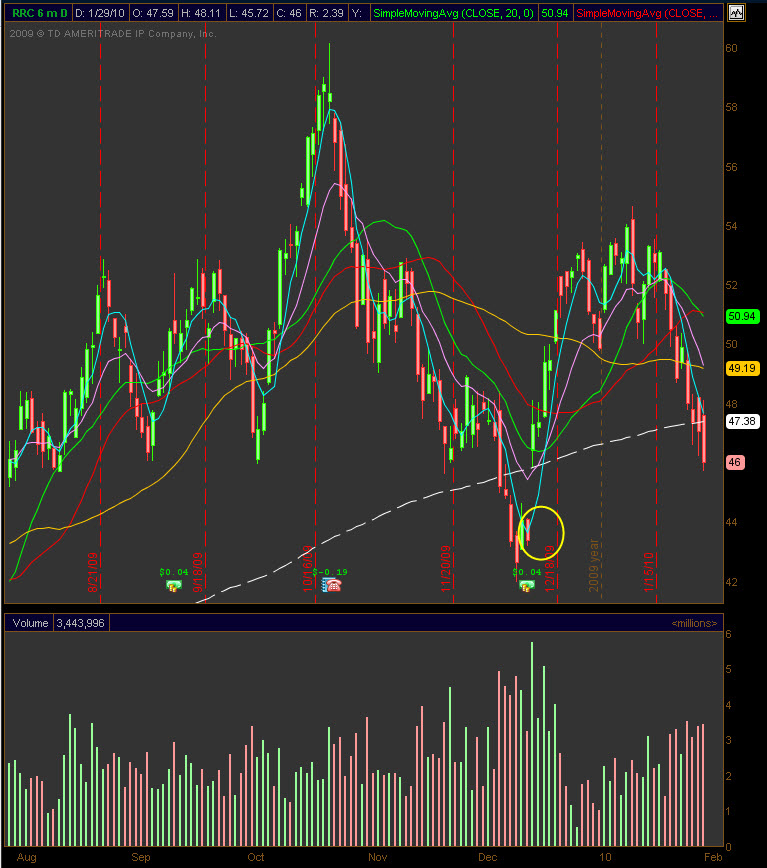