Warning: Trying to access array offset on value of type bool in /home/335080.cloudwaysapps.com/kjttymqdec/public_html/wp-content/themes/Centumr/inc/template-tags.php on line 1109
 Please, take my job. – PsychTrader 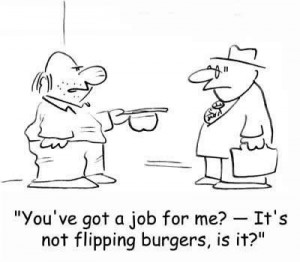 With the unemployment rate in the double digits, those still with jobs are the most unhappy they’ve been in over two decades.  If that doesn’t surprise you then maybe the fact that it’s unanimous in that there’s not one age group to blame for the drop, everyone is displeased. Is corporate America that broken? Probably. I haven’t had a “real” job in quite some time but I’d venture to guess that with cutbacks to increase profits, the average employee is being squeezed for all they are worth.

My take on this whole survey is that the employed, as unhappy as they are, should still be grateful that they have a job. Sure, it’s nice sitting at home eating 5lb blocks of cheese and watching football as you erode your savings, but where’s your sense of adventure? So what if it takes you 85 minutes to drive 20 miles into work. Think of all the “quiet time” you’d have to analyze your life and recognize how miserable it is to be working, have health care, and some self-esteem.

I joke of course, but job loss is no laughing matter. Back in my day I was a career counselor and I met with some great people who were simply down on their luck. This was just after the “dot bomb” era and I had people with no college degree who had been making six figures wanting to pick right up where they left off. I got tired of beating my drum about taking what’s out there and moving on as those high flying days were long gone. People would leave my office in disgust and then 30-days later come back asking for a job search. Life has a way of humbling us all, some more than others it seems.

If working truly does suck as bad as this survey suggests then perhaps corporate America can get creative and step out of the rut. Doubt that will ever happen because they know that if cubicle Ken doesn’t want to do the work for the pay then there are 5 others who would. Id further venture a guess that if HR departments conducted an internal (even “anonymous”) survey that the numbers would be much higher as far as satisfaction is concerned.

There isn’t a day that goes by that I don’t reflect on what a great job career I have. There is nothing like feeling self-sufficient in what I do and I wouldn’t trade it for anything. (Don’t forget we have the non-farm payrolls and unemployment rate on Friday).