It would appear as though the major indices are giving a lot of credence to the auto industry bailout as the Senate failed to pass the bill and the overnight futures tanked. The open Friday morning was looking pretty grim until two things—decent data and a rope. The decent data was that the retail sales number was actually better than expected and the producer price index was almost what was expected. The way this market has rallied with horrible data, it’s no surprise that the futures started to rise. The rope came in the form of the idea to use some of the TARP funds to aid the auto industry and keep them afloat until a non-lame duck congress is in place. The combination of both of these items led to a rather large swing for the major indices on Friday.

This coming week holds a few big ticket items from the economic reports side of the market. The first, and largest, is that the FOMC meets this coming week and we get their statement on Tuesday afternoon. The market has priced in a cut, but the uncertainty comes into play when trying to figure out how much of a cut. The street is expecting a 50 basis point cut in the Fed funds rate so we’ll have to see what happens as it is currently at 1. Last year at this time the Fed funds rate was 4.25! Keep an eye on how the market reacts to the actual statement and the future looking language.

The other big ticket report comes on the same day as the FOMC statement and that is the consumer price index (CPI). Consumer prices account for a majority of overall inflation and with last week’s retail numbers there is a bit of hope that the consumer may be down, but not out. Certainly falling commodity prices have helped, but the bomb may come in 2009 as personal debt skyrockets and personal bankruptcies hit an all-time high. If we have high unemployment and companies continuing to shed employees, those presents under the tree are coming from either savings or debt and my vote is on the latter. 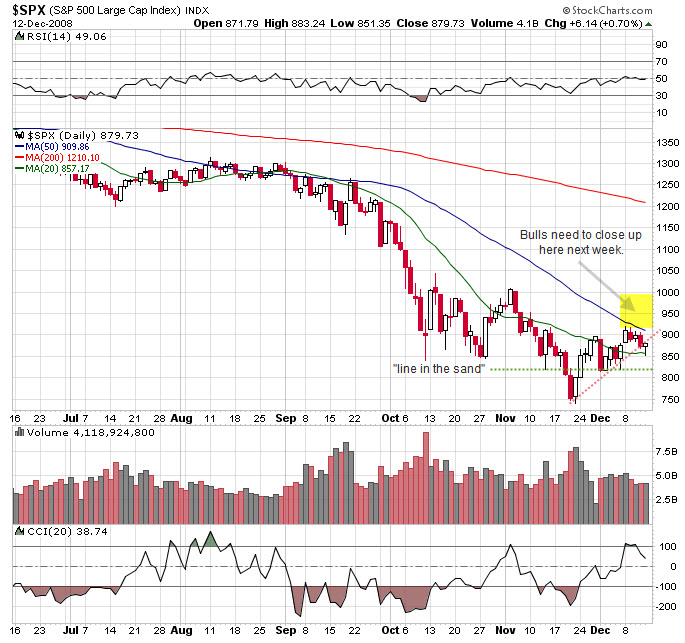