Bottom line is that it appears more likely that the gap at 1312.62 gets filled this coming week. Memorial day isn’t that far off and historically the market hasn’t done well the week before Memorial day. That gap could be considered low hanging fruit at this point so we will look for negative price action early next week and take that opportunity to sell some put spreads. We can also take that time to buy our leg of the call spreads and then sell the other leg when the bounce occurs. The risk we run in doing so is that the bounce doesn’t come and we are stuck with a decaying out-of-the-money call.

Well, the gap filled and I was able to leg into some June credit spreads on the put side as the first part of the week was indeed bearish. The second half of the week was a solid bounce that followed through to the close of trading. The Friday before Memorial day is a crap-shoot, for the most part, but the last three have been negative. I was somewhat hoping for a negative day as I was short the 1330 calls and it was painful for most of the day. I was also looking for an opportunity to buy some calls in anticipation of a bullish week ahead but failed to pull the trigger.

Heading into a holiday shortened week, which is seasonally favorable to the bulls, one has to favor a move higher. What was surprising to me last week was that the 50 SMA did not hold as resistance. I was using that as a level that would perhaps provide a bit of a stall in price action to protect my short position at 1330. It’s that lack of resistance that has me eying what I consider to be a perfect storm in the making. There is a whole mess of technical levels sitting at/near 1338 and if that levels gives way, fireworks are sure to ensue.

I was caught leaning to the downside this week with my short position at 1330 and barely made it out with a profit. Not ideal, but the real takeaway from that whole experience is that I’m sure I wasn’t the only one. I bet that there are many who are expecting this short-term downtrend and all the technical levels near 1338 to act as resistance. We’ve got seasonality on the side of the bulls and some big catalyst in the form of the ADP Non-Farm Employment Change, ISM Manufacturing PMI, weekly claims, non-farm payrolls, unemployment rate and ISM Non-Manufacturing PMI. Combine these reports, significant technical levels and a week that may have many away from their desks with “what if” trigger trades ready and we have the potential for a perfect storm. 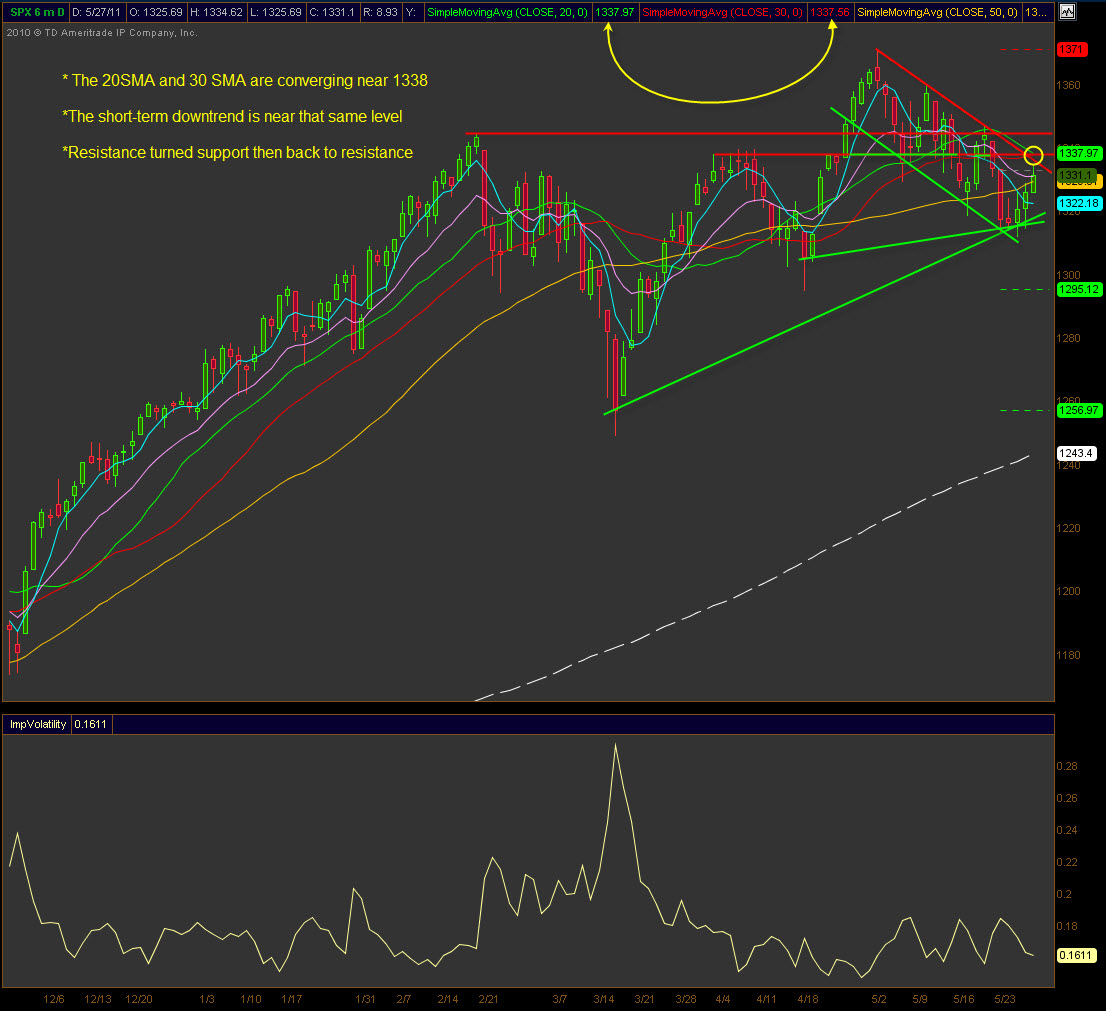 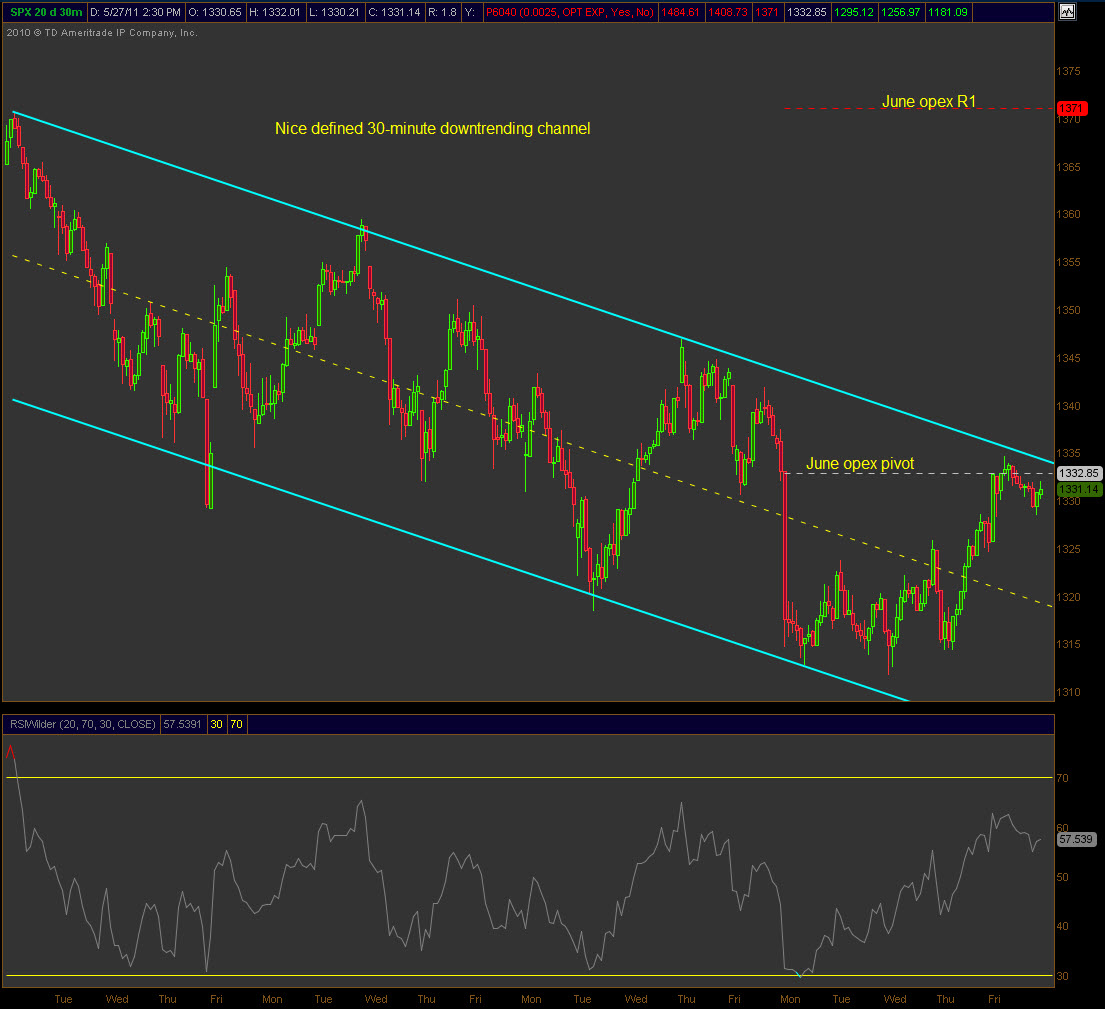 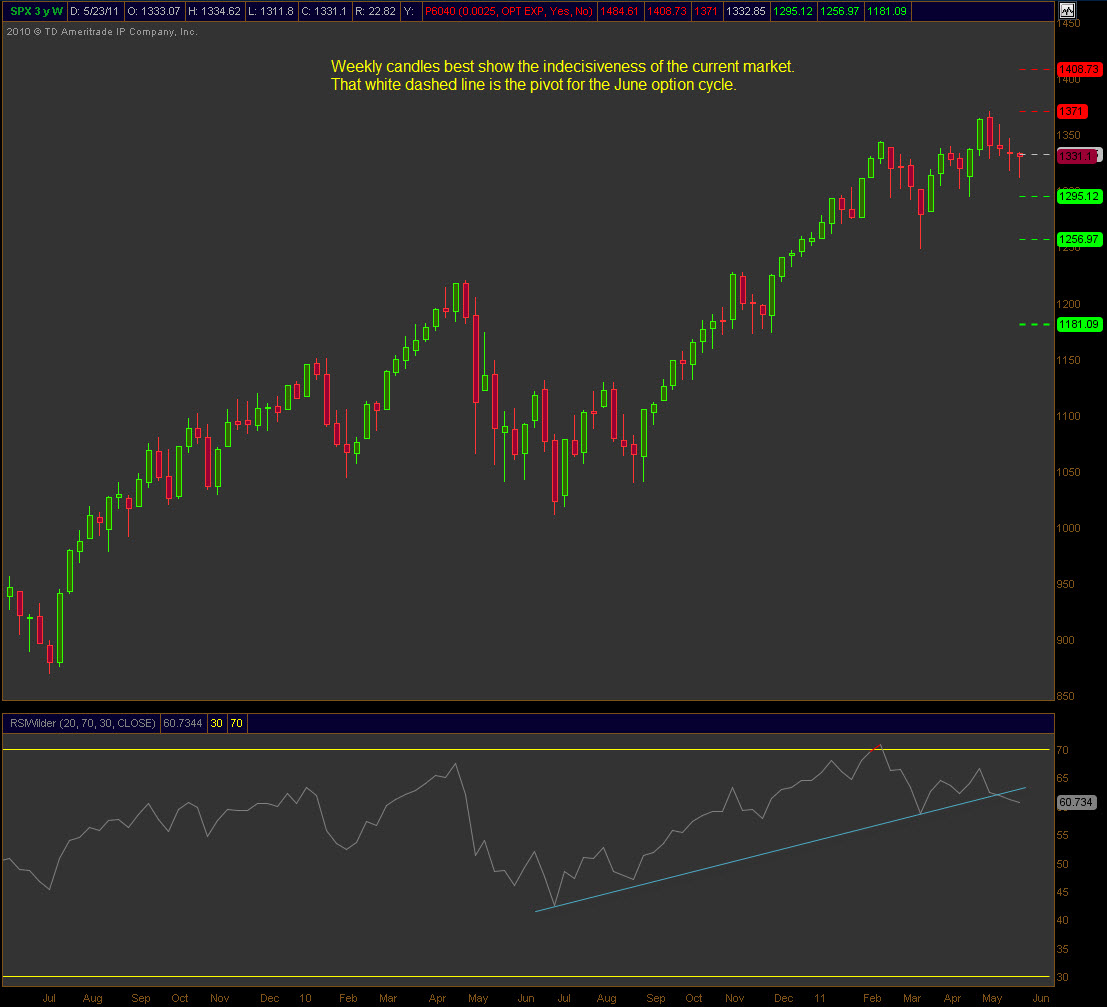 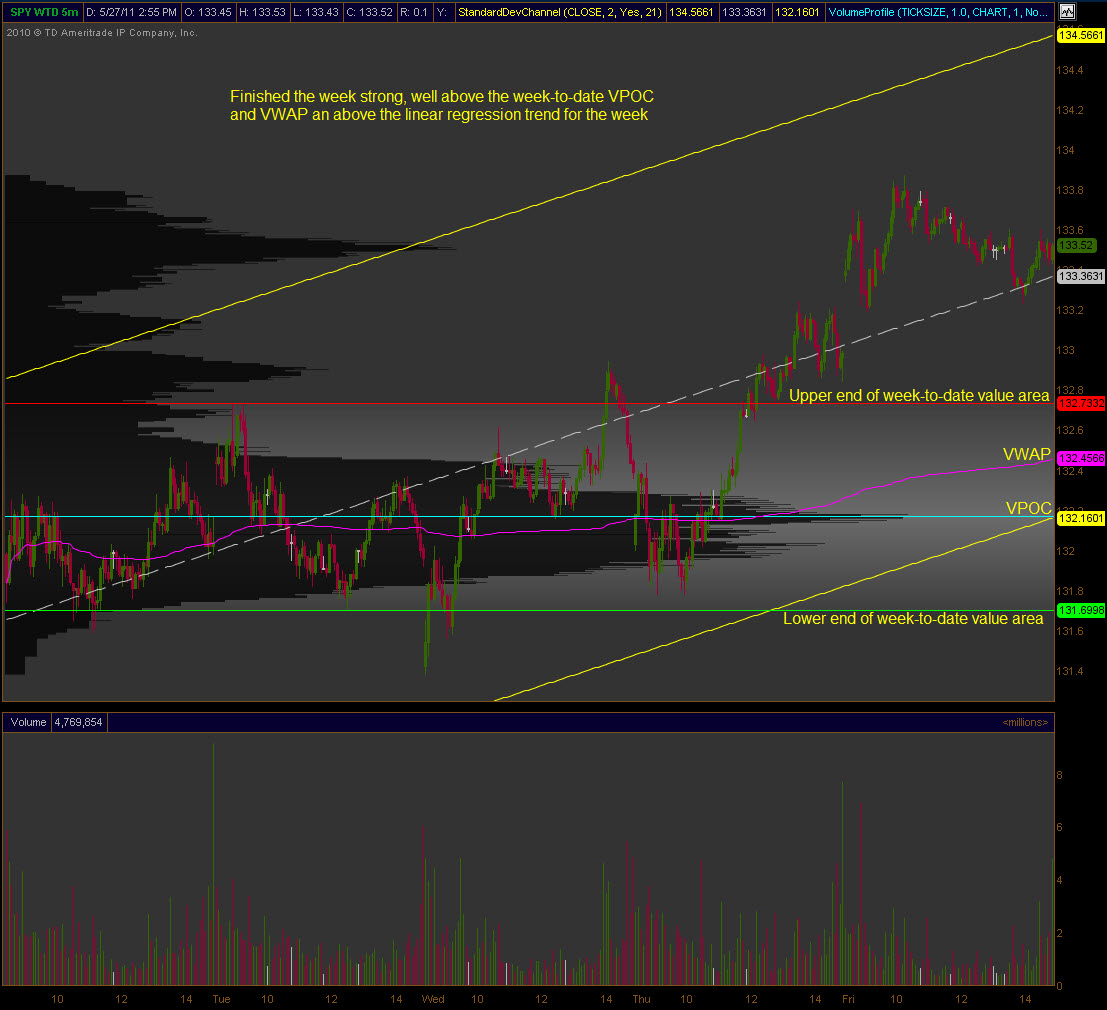 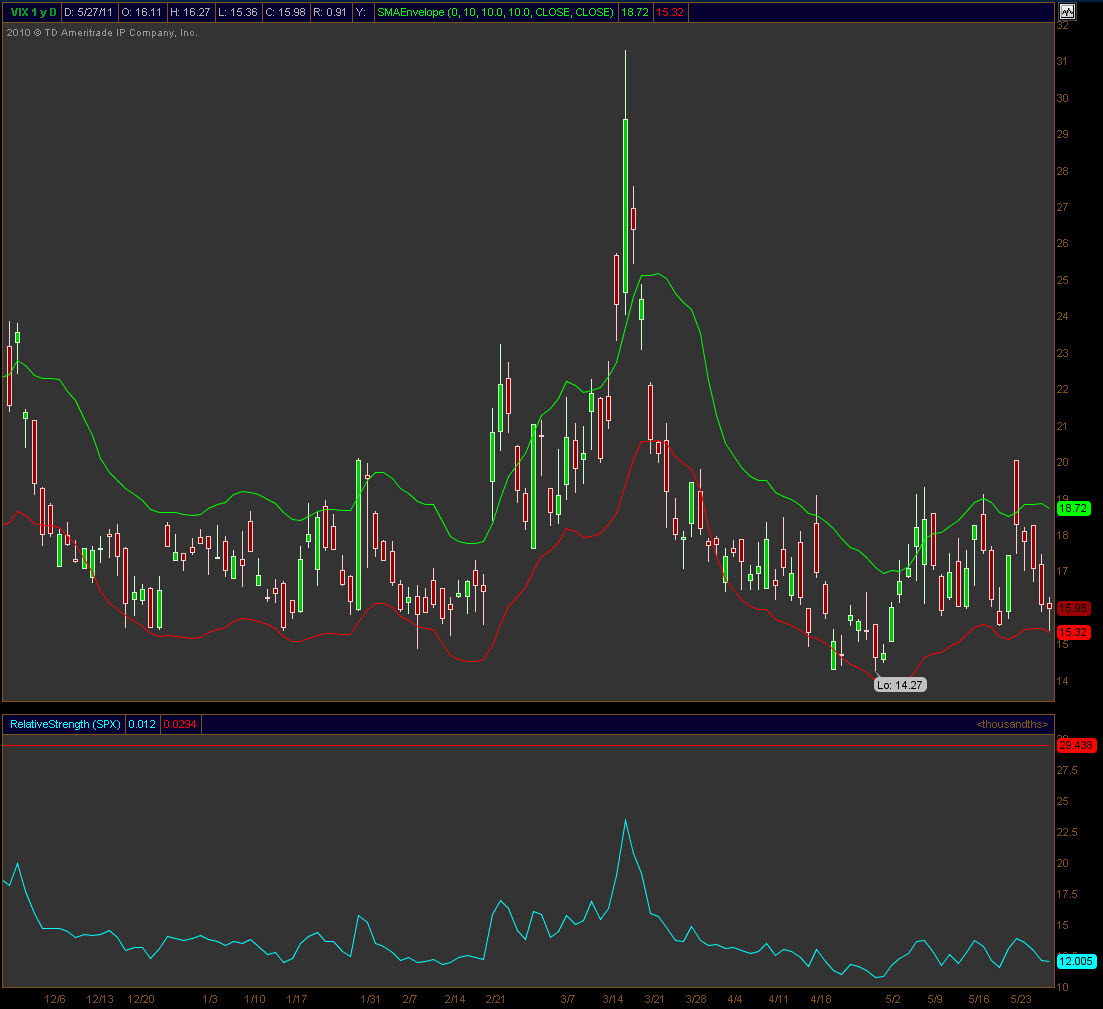 As I’ve mentioned before, I always like to look at the weekly chains after the close on Friday. I know that the open interest is all the volume on Thursday, the first day they were able to trade, and that today’s volume consists of hedges, adjustments and speculation going into next week. I’ve highlighted in yellow the strikes and action that interested me this past week. Most notably is the 8500 contracts for the 1350 calls. Those could pay off nicely if seasonality holds and the short-term downtrend and mess of technical resistance levels don’t. 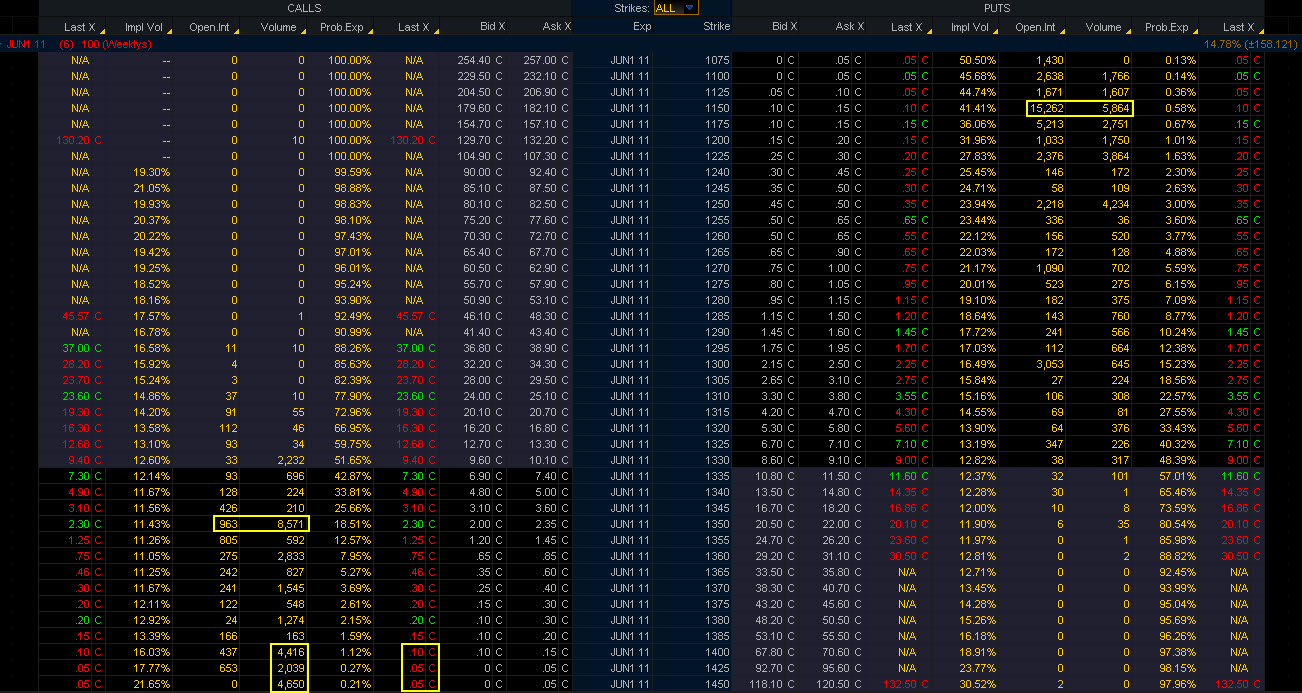 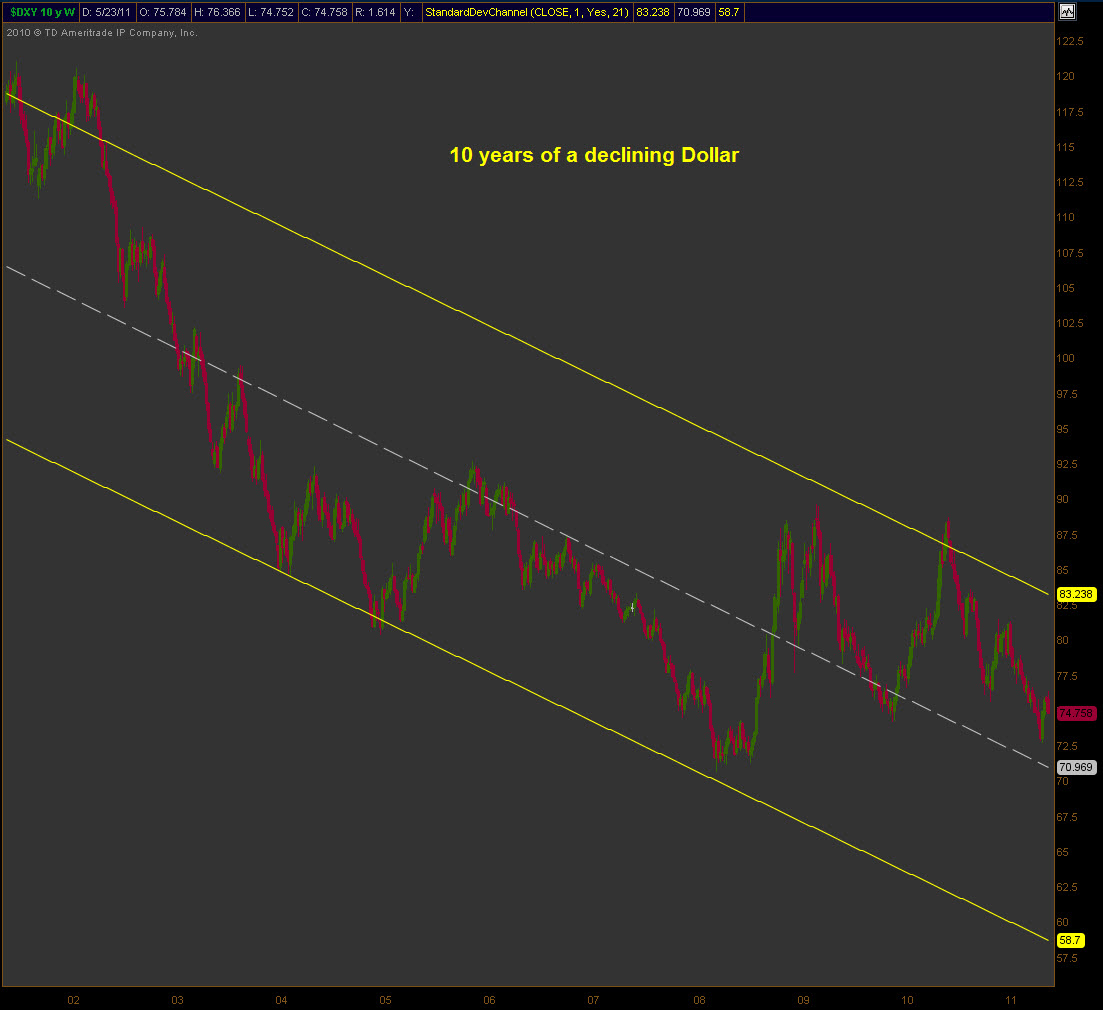