It’s not about the money left on the table

July was one of those cycles that served as a gentle reminder of why I trade the way I do. Most people would never take a trade where they risk $9 to make $1 but I do it every month. The edge I have is that odds are significantly in my favor and thus it makes sense to take the trade.

I thought I’d share what I did for the July cycle for my clients over at 60/40. While this isn’t the ideal cycle, the valuable education is well worth the money that was left on the table. I’ve added a chart below with the dates of the transactions to help with clarity. 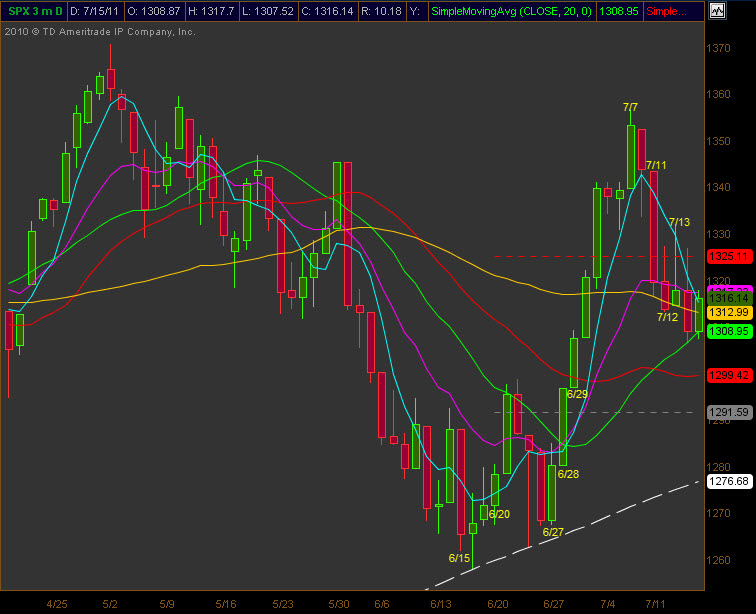 For the call side I was initially looking to sell beyond 1360 and pulled the orders after the market failed to break above the 20 SMA 6/22 then proceed to sell of on 6/23 and 6/24. On the 26th of June I decided to sell the 1325/1330 call spreads because it was right at the R1 level for the July cycle and above the 50 SMA which was surely going to provide some resistance or at least sideways chop. I took in a mere $.60 for that spread so the risk was $4.40 which is actually a decent return on the risk for my style of trading.

On the 29th of June the market made a higher high and closed above the 30 SMA and what I had sold for $.60 was now worth $2.00 so I was seeing a large unrealized loss in that position. Not much fun. It was at this point that I decided to average in to the position still believing that the 50 SMA and R1 would hold. I sold another 10% position for $1.80 bringing my average credit to $1.20 and a total 20% position. I was now risking $3.80 to make $1.20 but I had twice the amount of capital at risk.

I’ve been doing this a long time and knew at this point, with two weeks left in the cycle, that I needed to adjust the 1325/1330 spreads and thus I began to assess August call spreads. On July 7th when many indicators were giving extreme overbought signals despite a few days of sideways action I sold a 40% position in the August 1375/1385 call spreads for $3.50. I was taking on more risk and using 40% more of my capital for a total of 80% at risk (it is for this very situation that I only use 40% per option cycle leaving 60% to adjust/manage risk).

In retrospect I couldn’t have sold those August calls at a better time and they started to pay off nicely in just a few days. My maximum loss on the 1325/1330 spread was $3.80 and the spread was trading above $4 so I had to wait for it to come down in price if I wanted to buy any back. I did, and bought back the whole position on the 11th of July for $2.75 taking a $1.55 loss on that position which equated to a 6.2% loss.

However, I had sold the August call spreads for $3.50 and bought back 1/2 of them on the 11th of July for $2.00 giving me a 3% profit so my total hit at this point was 3.2% and I felt pretty good knowing that I had a 3.6% return coming on my put spreads that would have me in the black at expiration. Knowing that the 1325s I was short were no longer a concern takes a huge weight off the psychological side of premium selling.

I still had the 1345s and the 1340s I needed to manage. This was a 20% position. I’ve rolled up and out 20% positions before so I had no concerns doing this for August. I also had the 1375/1385 call spreads for August that were now trading around $1.50 so I had a nice 4% unrealized gain in those. Things were looking better and time was doing its thing as option expiration crept closer and closer.

Time and price did their work and on the 12th of July I was able to buy back the 1345/1355 call spreads that I sold for $.70 for $.50. I was down to a 10% position that had me short the 1340/1350 call spread and was still holding the August 1375/1385 call spreads. I had an order out there working to buy back the 1340/1350 call spreads for $.50 but couldn’t get filled. On the 13th the market was looking to make new highs early in the day so rather than look to roll I decided to raise my offer to $.90 and was filled as the market sold off later in the day. Small loss but out of the calls. Not knowing what to expect regarding the EU or QE3 I felt this was one of my better trades despite the loss.

I was out of my July call spreads for break-even and had managed risk well. The kicker is that the July settlement for $SPX was 1316.02 so there was significant money left on the table (nearly 6%). So much so that some of my clients felt the need to call or email me asking why. These are the same clients that have been with me less than two years and have been privy to a bull market. I kindly reminded them that we still have a 20% position which is, as of Friday’s close, yielding us a very nice 4.5% unrealized gain and that we would be taking that off on Monday allowing the weekend to do it’s job.

Something these newer clients hadn’t yet experienced was a runaway market, one in which you take a smaller loss to avoid taking a larger loss playing the “hope and wait” game that the market will come back towards your short strikes. That type of thinking is a losing mindset and leads to large losses as a premium seller. Markets can work off overbought/oversold levels by trending sideways before continuing in the same direction. I’ve seen it time and time again and thus, when $SPX broke through 1325 then the 50 SMA then 1325, I knew that it was the time to manage risk so I acted accordingly.

Money was left on the table, no question, and many would have preferred to wait things out. In fact, I know of one client that did just that and they were rewarded nicely for doing so. What this client failed to realize is that waiting worked this time, but in 2008 they would have taken a significant hit. The damage for them waiting things out seems benign now because they made good money and hindsight is 20/20. The next time the market moves significantly in a direction and they decide to wait things out again (because it worked last time) they may not be so lucky.

If you take nothing else away from this post because you don’t sell premium or my writing was not easy to follow, please understand this. Anchoring is a cognitive bias where important decisions are made based on an event (like the trade working this time) that occurred one or more times. The tendency is to think that future events will respond likewise. Nothing could be further from the truth. That thinking is akin to gambler’s fallacy. The market could care less

It’s OK to take a loss, especially if it is part of your system/strategy. What’s not OK is to take a large loss because of a cognitive bias, greed or ignorance. My system calls for risk management when technical levels are broken and thus I acted as expected. It worked well this time and will work well the next time it’s required. I will continue to leave money on the table as that offsets the huge loss that can be taken if risk isn’t managed accordingly.