Fear has a way of making us focus on unfavorable headlines and price action. Fear impacts our ability to evaluate alternatives as it clouds objectivity. Fear is why profits are taken too quickly. Fear is a four letter word that comes in many flavors. 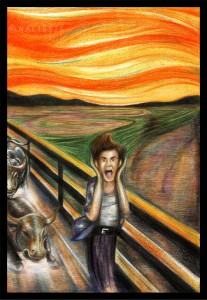 Fear of losing: Nobody wants to lose—doesn’t matter if it’s a spelling bee in the 5th grade or a newly entered long position in a stock that just broke through resistance. Losing sucks. Losing reminds us that perhaps we aren’t as good as we thought (hoped).

Fear of being wrong: Remember that time you blurted out the wrong answer and everyone laughed? Still sticks with you after all these years and screws with your mind. That new short position you just took is about to get squeezed—or at least that’s the thought running through your mind, right?

Fear of missing out: This is where we can really let our imperfections shine as we buy at the top and sell at the bottom. But hey, we didn’t miss out on the action!  Succumbing to the fear of missing a potential move and jumping in mid-stream trumps any good trading plan or preparation. This is a lack of self-discipline and causes much of the psychological damage seen in the markets.

Fear impedes our ability to be creative. Fear suffocates, debilitates, and causes many to wonder “what if…” rather than “why not…” Hope is used as a remedy by the fearful, but often gets smashed and is soon replaced with self-help books, talk therapy and medication.

Courage is what’s needed—the courage to fail.  With proper planning, risk can be managed and success can be found. Having the courage to step off the curb lends itself nicely to creating who you are as a market participant. Define your risk, adhere to your trading plan and fear becomes a fleeting thought rather than a debilitating one.

It’s OK to lose.  Just make sure that it’s within your defined risk/reward and move on.

It’s OK to be wrong. What’s not OK is to be stubborn and stick with a losing position.

It’s OK to miss out. There are thousands of other names out there, find your trade.

If you want to become a better trader you need to realize that fear cannot be eliminated. It can, however, be used as an edge in your market participation. For me, one of my favorite times to sell premium is after a large, quick move—puts for fear and calls for greed.

“To conquer fear is the beginning of wisdom.” ~ Bertrand Russell