In the trenches of the markets we make decisions on a daily basis as to whether and where our capital is put to work. Perhaps the decision is something as quick as a short-term scalp lasting mere seconds or a longer lasting swing trade that may take 2-3 days to reach its potential. 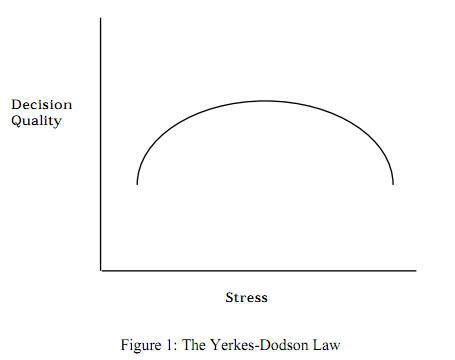 Regardless of the time frame, there is pressure to make that trade. Some pressure is environmental while other pressure is internal and both have the ability to cloud objectivity.

Research suggests that “a common source of task stress is extreme time pressure on decision making.  Other factors that can make a task seem more complex than is warranted include its perceived importance, the volume of data presented from all sources (including the Redundancy bias) and task novelty.”

As an example, we have time pressure in making a decision to trade or not. Add to that proper risk management, possible information overload and other environmental factors and the decision becomes more complex. So complex that the decision quality is negatively impacted and stress is often the result. That stress is one aspect of the complexity bias and can hinder success in the markets.

I’ve always believed in being a proactive trader rather than a reactive one and feel as though that mindset helps to keep my decisions less complex. The sweet spot of the Yerkes-Dodson Law is large and should accommodate most strategies. A more mechanical systems trader trader may, at times, not have enough stress because the actual decision is quantified such that stress just doesn’t have a chance to manifest itself. Conversely, a discretionary trader is more susceptible to stress and thus must find their sweet spot for the decisions they make in the markets.

Does this mean that everyone should automate their trading strategy, turn the machine on and walk away? No! What it does mean is that certain characteristic traits like self-discipline (conscientiousness) and an even-temperament (neuroticism) are key for success. Whether a discretionary trader or a system trader is better is irrelevant. Being a discretionary trader does not mean a system is not used and being a system trader does not mean discretion isn’t used. Rather, it’s when that discretion is used that separates the two and that is only one of many decisions to be made.