The third trading day of the week brought the third day of losses to the major indices. From a technical standpoint it appears as though the markets will test the October lows. The 64K question is whether or not support will hold. If the support fails, we may get that capitulation day that everyone was talking about a few weeks ago. The October low in the S&P ($SPX) was $839.80 and it is currently at $852.30 so that test will more than likely occur tomorrow. Two catalysts are available for the test; Wal-Mart’s earnings and weekly jobless claims. 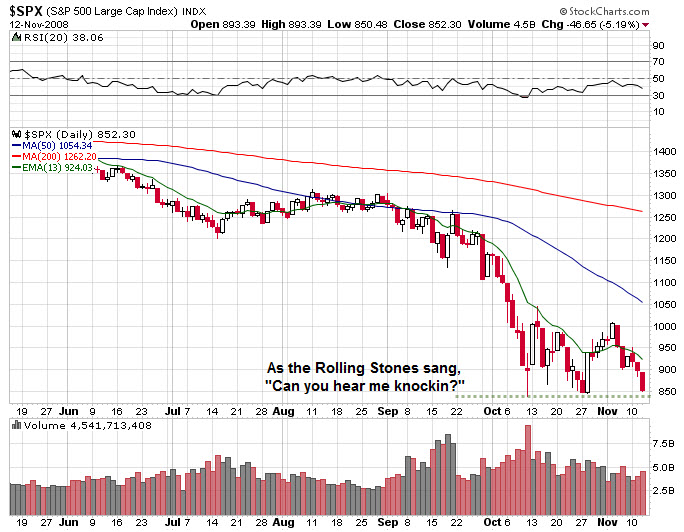 The numbers are starting to come in for hedge fund redemptions and they aren’t pretty. Some reports indicate that because of the severe leverage by hedge funds, that for every $150 in redemptions translates into $400 of portfolio liquidation. A reported $100 billion was taken out of the hedge fund market in October. During October the VIX peaked at an all-time high of $89.53 and the S&P 500 ($SPX) lost 17% of its value.

An historic day occurred in the tech heavy Nasdaq ($COMP) today as it closed under the $1500 price level for the first time in 5 years. Take that staggering fact and then assume you had a portfolio that mimicked the Nasdaq and you were a buy and hold investor; you’ve basically gone on a trip without leaving the farm. This isn’t the lowest point of the current bear market, that number is $1493.79 which was made on the 24th of October. With the Nasdaq closing at the lows of the day and not much good news out there, it’s highly likely that the lows will be tested tomorrow as well. 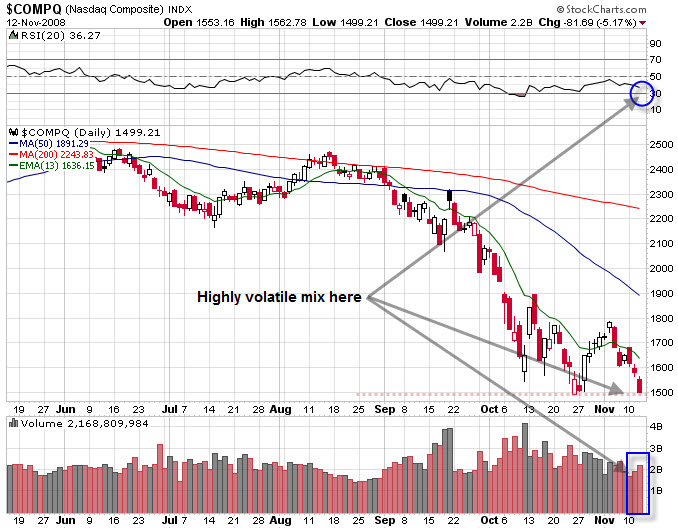