Despite a few nice gainers this past week, the major indices still turned in a losing week. The Dow lost -2.2%, the Nasdaq lost -1.7%, and the S&P 500 lost -2.3%. Most of this weekly loss can be attributed to Monday’s loss. What’s most surprising is that as the week wore on, and the bad economic news continued to come in, the markets climbed. It’s almost as if the market has already priced in Armageddon so nothing can shake it.

The big ticket item this past week was the horrible non-farm payrolls that came out on Friday. The street was looking for a loss of 320K jobs and was handed a whopping 533K loss. With such a large miss, this number would typically have driven the markets lower and hard. A few things stand out as to why we saw what we did on Friday and the first is that the unemployment rate actually improved. The second item is that this market might be at a point where bad economic news, bad earnings, and bad forecasts are already priced in. Whatever the cause for the rally on Friday may never be known but what is known is that the market isn’t reacting the way it typically does and that should raise a flag for each of us.

If indeed the market has priced in terrible economic reports for the near term, then we will get a good chance to confirm that this coming week. On Wednesday we get the trade balance and the weekly jobless claims and then on Friday we get the producer price index and retail sales numbers. Look for how the market reacts to those numbers and form an opinion. Check the technical levels and sift through your watch list for potential candidates. 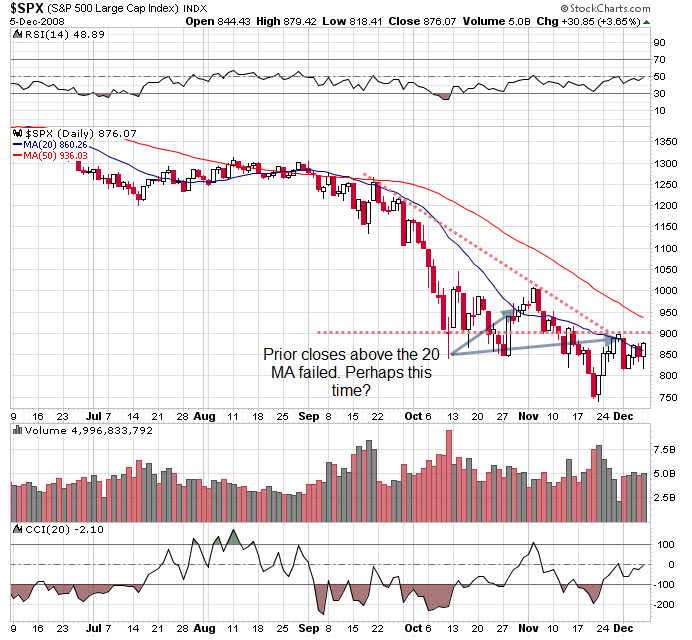 Tomorrow we get some Fed speak from Kroszner and Kohn and HRB and NSM are reporting earnings .