In a word, no. Not even close to being oversold. As the $SPX has teetered around the 1115 area recently it has given the overbought and oversold signals a nice rest. Shorter-term moving averages have corrected over time and frustration levels have risen, until today. The broader index broke the 200 SMA as well as the hearts of many bulls today. No worries though, the FOMC statement will be released tomorrow and we could retrace the past two days price action in one afternoon (written with tongue-in-cheek, but crazier things have happened).

I’ve put together a few items that I like to look at on a regular basis when I hear talk about being overbought/oversold. The first is the Bullish Percent Index (BPI) which is calculated by dividing the number of stocks in the S&P 500 that have given a buy signal (via Point and Figure charts), by the total number of stocks in that group.The SPX is overbought when the BPI is above 70% and oversold when below 30%. The BPI is currently sitting at 54.80 and has given a nice bounce since the beginning of June. 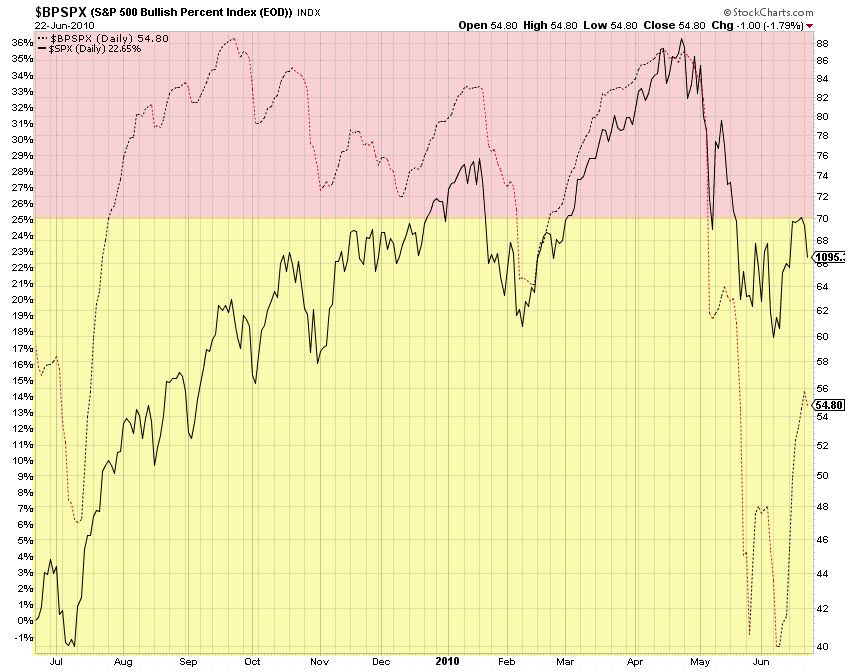 The other piece of data I’d like to share is the number of stocks in the S&P 500 that are above several simple moving averages. I track this data and post updates each weekend for this and several other sectors. With the broader index breaking below the 200 SMA today, the data still shows that 51% of the components are trading above their 200 SMA. You can see the rest of the stats below.

Do we move lower from here? I don’t know, but there’s plenty of stocks that could move lower. I’d say that the reaction to the Yuan news and today’s price action suggest that perhaps lower is the easier route. I’m still trying to leg into put spreads for July expiry so personally I’d like to see a dip down to the 1065 area.