December Can Be Tricky As A Premium Seller

Historically there’s a positive bias to December in the markets. As an option trader I like to look at the returns for the option cycle versus the calendar month. Specifically, I want to know if there is a difference between the December cycle (4th Monday of November through 3rd Friday of December) and the 4th Monday of December through the end of the month when the January options of 2011 are active. In the chart below you can see that there are indeed some years where a calendar month showed a  gain and the option cycle produced a loss and vice versa. 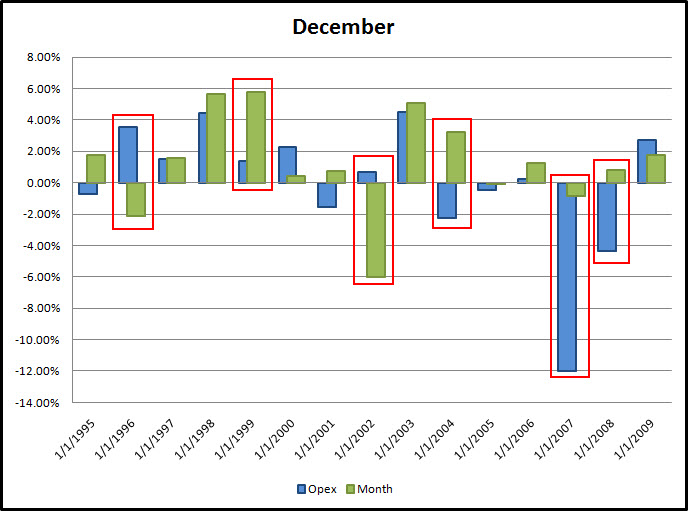 The biggest discrepancy occurred in 2007 during the financial turmoil. It just so happened that in 2007 the December options expired as a short-term low was being put in before a higher high was made towards the end of the month.  There are other occurrences as well and this data can be important to me as I assess my January position. Is there always an explanation? No. But I do this every option cycle and some months there are patterns that occur and that type of research is priceless as it provides an edge.

The average gain since 1995 for the broader market in December is 1.26% whereas the December option cycle shows a -0.01% loss. If I take out 2007 the monthly gain bumps to 1.41% and the option cycle averages an 0.85% gain. Bottom line is that December can be tricky when compared to other months so I’m always more cautious when selling premium. I tend to move one or two more strikes out-of-the-money to give myself a bit more cushion, especially if I’ve had a great year. It only takes one month of having a short strike get taken out to wipe out many months of profit.